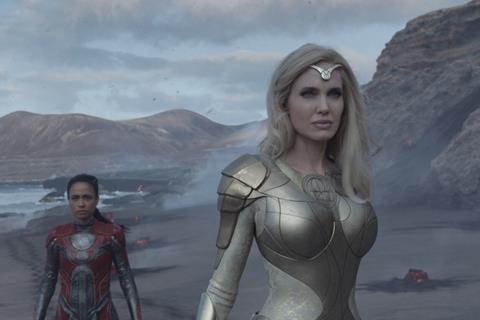 Disney’s Eternals followed the traditional Marvel pattern of a hefty drop in the second session, with an estimated 61% fall in North America, and a gentler 49% decline in international holdover markets.

Eternals grossed an estimated $27.5m in North America, retaining the box office top spot, and an estimated $48.0m for international. Respective totals after two weekends of play are $118.8m and $162.6m, combining for a $281.4m global tally.

For comparison, Black Widow had reached $264m after two weekends of play back in July. Black Widow, which was available simultaneously on cinemas and on Disney+ Premier Access, saw steeper declines in its second weekend – for example a 68% drop in North America and a 55% drop in the same suite of international markets.

Russia/CIS opened last Monday (November 8), and has grossed an estimated $5.4m in its first week of play. The other new openings were in Indonesia ($3.3m) and UAE ($1.3m).

There are no new openings this coming weekend, and the China release date is yet to be confirmed. Black Widow eventually grossed $380m worldwide, and Shang-Chi And The Legend Of The Ten Rings (which was not on Disney+ when originally released in cinemas) reached $431m. Those numbers suggest box office targets for Eternals.

‘No Time To Die’ boosted by Australia opening

UPDATED: No Time To Die is now the second US studio film of the pandemic era to reach $700m box office – joining Fast & Furious 9 ($721m). The latest weekend saw the Universal/MGM release add another $24.1m in international markets and $4.4m in North America. Cumulative totals are $558m for international, $150.3m in North America and $708.3m worldwide.

No Time To Die should overtake Fast & Furious 9 to become the biggest US studio film of the pandemic era globally this coming weekend.

The film received a boost from a new opening in Australia, delivering an estimated $8.2m – the biggest debut for a film in the territory since December 2019.

No Time To Die passed $70m in Germany at the weekend, and enjoyed another strong hold in UK/Ireland (down just 21%), and has now reached $126.1m in the territory – in line with Skyfall and Spectre at the same stage of release.

‘Be Somebody’ leads China box office

Landing in third place in the global chart for the weekend – pushing the likes of Dune and Venom: Let There Be Carnage down the rankings – is Be Somebody, which grossed $19.9m in China for a $21.8m total. The crime drama is directed and co-written by Liu Xunzimo, and concerns a group of filmmakers who decide to make a movie about a real-life murder case, not realising that the killer is actually among them.

Also newly released in China is Anita, which landed in second place at the Chinese box office with $6.3m. The biographical drama traces the life of Hong Kong Cantopop star Anita Mui, and is directed by Leung Lok Man (aka Longman Leung). Mui’s life was previously the subject of 2007 Chinese TV series Anita Mui Fei and 2019 feature film Dearest Anita.

Also at the China box office, The Battle At Lake Changjin added another $4.8m taking its total to a mighty $882m. No Time To Die added $4.4m bringing the total in China to $58.0m. Disney’s newly released Jungle Cruise landed in fifth place with $3.3m.

UPDATED: With Be Somebody releasing in China and family adventure Clifford The Big Red Dog generating an estimated $16.4m (and $22m including previews) in North America, Dune was pushed down from third to fifth place in the global rankings.

Dune has now reached 96.9% of Tenet’s lifetime global tally of $364m. The film has yet to open in Australia (December 2) and Vietnam (December 3).

‘Venom: Let There Be Carnage’ pushes towards $450m

The Venom sequel has now overtaken Shang-Chi And The Legend Of The Ten Rings ($430.5m) to become the seventh biggest hit of 2021 worldwide, and the fourth biggest among US studio titles – after Fast & Furious 9, No Time To Die and Godzilla Vs Kong. (The other three big hits this year are all Chinese films.)

The film was boosted by new release in Malaysia ($950,000 including previews), while France led international holdover markets with an estimated $920,000.

Also for Sony, the studio scored a hit in Spain with action thriller The Vault, landing in second place (behind Eternals) with $1.5m from 478 cinemas. The film follows a group of treasure hunters who try to rob a seemingly impenetrable bank in 10 days while all eyes are set on the 2010 football World Cup. The multilingual film boasts an international cast including Astrid Bergès-Frisbey, Sam Riley, Liam Cunningham, Luis Tosar and Famke Janssen, and is led by Freddie Highmore, who is fluent in Spanish. Jaume Balagueró (REC) directs.