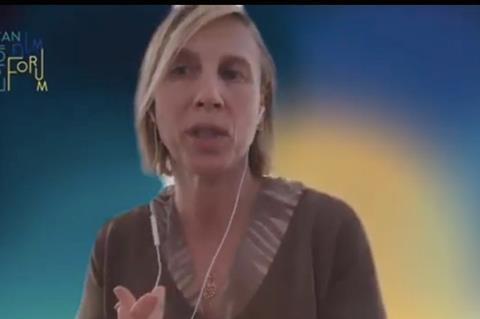 The lack a cross-border insurance guarantee fund is crippling the European film industry’s abilitiy to get back on its feet in the middle of the Covid-19 pandemic,said a group of experts at the European Film Forum, presented by Creative Europe at the San Sebastian International Film Festival on Tuesday (September 22).

Luis Chaby, president of the European Film Agency Directors Association (EFADs), noted seven member states have insurance guarantee funds set up nationally – “Austria, France, the Netherlands, Belgium, UK, Germany and soon to be Ireland,” he said. ”These instruments are mainly for national productions shoots in the respective companies. These represents a huge problem for European productions, so we have been relentlessly calling on the European Commission to set up an insurance guarantee fund for European co-productions. So far we didn’t manage to find a proper solution but I’m sure that we will achieve something in this area because it’s vital to keep our populations going.”

Chaby called for action in the areas of funding and regulation. He applauded the EU recovery package but asked for more guidance about “how precisely this money will be distributed in practice to the audiovisual sector via the member states and regional authorities.”

He added, “An ambitious Media programme is a must for us,” and he called for a doubling of the programme’s budget.

In terms of regulations, he noted the streamers had benefited from the pandemic and called for them to contribute more to financing and promotion of European works. “ We want better promotion of European works. And online fair remuneration that’s crucial for us.” He also called on the platforms to share their data on audience consumption with rights holders as well as public regulators.

Peter Dinges, CEO of the German Federal Film Board (FFA), also expressed his worries about the hurdles faced by co-productions in 2020 and 2021. “What do we do with a co-production which is shot in France, but the Covid-19 case happens in Germany? It’s a contradiction so we limit our guarantees and only to German production or to German majority production. How do we harmonise this network of guarantee funds within Europe, so that co-productions are still possible? This is a big challenge.”

The need for new co-production funding and cross-border insurance guarantees were also suggested by Álvaro Longoria, Spanish producer and president of the European Producers Club in an event held the same day in San Sebastian.

During the Forum, The European Audiovisual Observatory warned that end-market revenues of audiovisual work in Europe are set to drop €10bn in 2020 becaue of the pandemic.

Lucía Recalde, head of unit audiovisual industry and media support rogrammes, European Commission, noted that Creative Europe has tried to “instill as much flexibility as possible” to help the European film industry weather the storm. One measure already taken by Creative Europe is to allocate  €5m to cinemas, which she noted “has spillover effects in the whole value chain.” Discussions are ongoing about next measures of support, but it was good news that the European Commission singled out the creative industries as “one of 14 Industrial ecosystems were considered as particularly vital for the recovery of the European economy.”

François Yon, partner and head of sales and business development of France’s Playtime Group, spoke about the impressive support that many European businesses have already received. “I think every entrepreneur of any small business in Europe felt glad he was not in China or in the US, you felt supported. And that’s a very important thing, that professional organizations and state organisations and government organisations have been extremely good at putting forward ideas and plans.”

Even if Covid hadn’t hit the world in 2020, the film and TV industries were already changing rapidly, the Forum heard. As Beatriz Navas, director of the Spanish Institute of Cinematography and Audiovisual Arts – ICAA, said, “We have different [audiovisual] laws in Spain that have been there for more than 10 years. So we need a bit of refreshment, we have to recover, and we have to look into the future.” She agreed that pan-European cooperation was crucial. “We have to work at the national level but then also bring this to the European level, to see how these efforts can have a bigger impact. We should strengthen our policies individually and then cooperate together.”