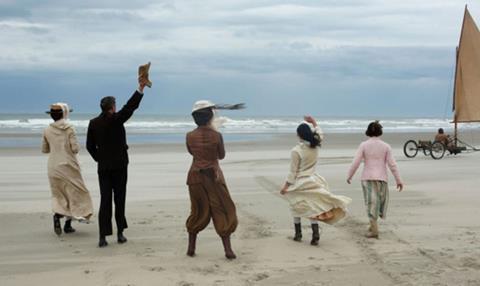 Set in the summer of 1910 on the rolling beaches of the northern French coast, the potential Cannes title revolves around a series of mysterious tourist disappearances and two local families, the curious fisherman clan, the Bréforts, and the eccentric, bourgeois Van Peteghems, who spend every summer in their imposing holiday mansion overlooking the bay.

When one of the Bréfort sons, Ma Loute, and the mischievous, teenage Billie Van Peteghem fall in love, the lives of both families are shaken to the core.

The new trailer reveals a quirky drama in which the majestic backdrops of France’s Slack Bay area, a unique coastal site where the Slack River joins the sea only at high tide also play a central role.

MFI first launched sales on Slack Bay in April 2015 and announced a raft of early deals on the film at the Cannes Film Festival last year.

The feature is produced by Paris-based 3B Productions with Berlin-based Twenty Twenty Vision on board as co-producers and the support of Arte France Cinema.

Speculation is rife that the film will premiere at Cannes. Its May 11 release date in France, by sister company Memento Distribution, suggests that it will make its debut at the festival.