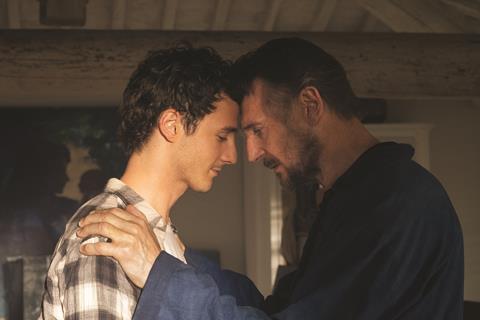 As AFM gets underway, HanWay Films has announced a raft of sales and revealed the first image for James D’Arcy’s feature directing debut Made In Italy.

Liam Neeson stars opposite his real-life son Micheál Richardson in the story of a bohemian London artist who returns to Italy with his estranged son to make a quick sale on the villa they inherited from his late wife, only to find it in a desperate state of disrepair.

The UK deal to Lionsgate was announced prior to Cannes, as the comedy drama was about to embark on its six-week shoot in London and Tuscany.

Lindsay Duncan and Valeria Bilello also star in the feature as, respectively, a no-nonsense ex-pat who catches the attention of Neeson’s character Robert and a young Italian chef who captures the heart of Richardson’s Jack.

HanWay is showing first footage for Made In Italy at AFM. Other titles on the company’s AFM slate include Seance starring Suki Waterhouse, which it is partnering on with Dark Castle Entertainment for worldwide sales, and Paul Schrader’s The Card Counter starring Oscar Isaac. HanWay is also screening footage from Matteo Garrone’s Pinocchio and Minamata.