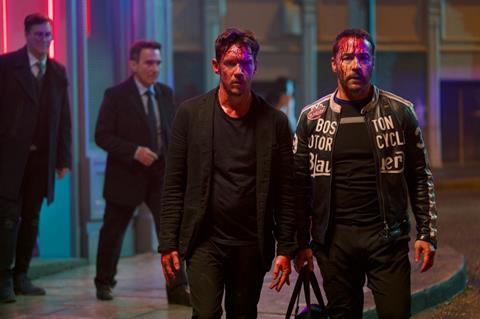 Alessio Della Valle wrote and directed the story about a New York mob boss (Hirsch) with aspirations to become an artist who crosses paths with an art dealer (Meyers) when Andy Warhol’s ’Pink Marilyn’ is stolen.

Meyers and Piven are shown in the first-look still from the film.

Fortunato Cerlino, Michael Madsen, Annabelle Belmondo and the pop star Anastacia round out the key cast on American Night, which features artwork by Andy Warhol, Mario Schifano and Jeff Koons, among others.

Martha Capello of Martha Production, Ilaria Dello Iacono of Pegasus Entertainment, and Giorgio Ferrero are producing in association with Giovanni Cova and Sergio Romerio of QMI, with RAI Cinema.

Voltage president and COO Jonathan Deckter announced the acquisition on Thursday (June 10). Voltage brokered the deal with ICM Partners, which represents US rights.