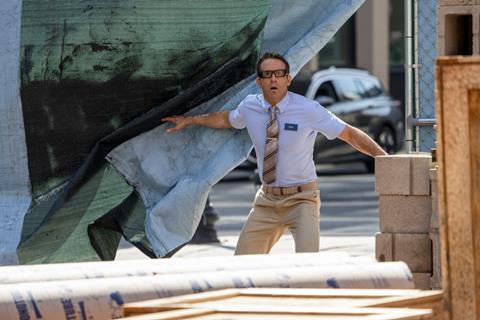 Free Guy continued its encouraging theatrical run given the circumstances of the pandemic as Disney executives said the action comedy crossed $200m at the global box office on Wednesday (September 1).

The 20th Century Studios release starring Ryan Reynolds and Jodie Comer stands at $200.8m, of which $118.5m comes from the international arena and $82.3m from North America, where it ranks number two in its third week of release.

Touted as one of the few films to get an exclusive theatrical release, let alone from Disney which continues to experiment with distribution patterns in a landscape shaken to the core by Covid, the original property becomes the seventh Hollywood film to reach the box office milestone this year. Shawn Levy directed.

Disney releases Marvel Studios’ Shang-Chi And The Legend of The Ten Rings on Friday and the action film will get a 45-day exclusive theatrical run, like Free Guy. Simu Liu stars alongside Awkwafina, Tony Leung and Michelle Yeoh. Destin Daniel Cretton directs.

Evening previews start tonight and the Marvel tentpole is forecast to gross around $40m in North America over the upcoming four-day Labor Day weekend, which would overtake Halloween’s $30.6m debut in 2007 to set a new record over a national holiday. The official end of summer season typically generates muted box office.

Shang-Chi opens in France, South Korea and Italy today and arrives in the UK, Australia, Japan, Germany, Mexico, Brazil, Russia and Spain on Friday. The international arena is expected to deliver roughly the same as North America over the four-day opening weekend for a global launch in the $90m+ range.