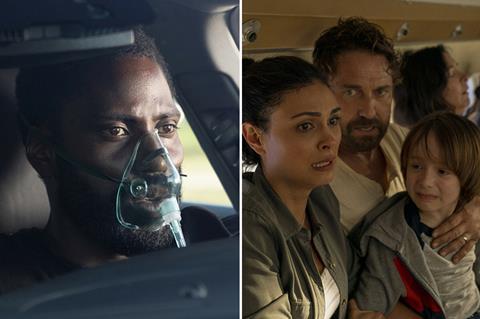 New openings in China, Mexico, Brazil and Bolivia provided a boost to Gerard Butler actioner Greenland, which grossed an estimated $4.83m from 11,009 locations at the weekend. The international total for the STX-backed film is $43.1m.

Greenland opened in third place in China with an estimated $3.4m from 9,187 cinemas – behind Daniel Wu Crime drama Caught In Time (with $30m) and local war epic Sacrifice (with $5m), a chart veteran that has reached a total of $156m. Greenland was the weekend’s top imported film at the China box office.

In Mexico, Greenland opened in first place, with an estimated $882,000 from 788 cinemas. That number is 47% ahead of the debut for Liam Neeson crime film Honest Thief, and is 27% ahead of recent new opener The Witches.

In Brazil, Greenland opened in second place, behind The Witches, with an estimated $191,000 from 428 sites – and $281,000 including previews. Brazil has been relatively quiet for new releases in recent weeks and months, but more cinemas are now reopening.

Australia was the very first market to welcome Tenet, with preview screenings there beginning on August 22, ahead of its release in France on August 24 and in multiple territories on August 26. Now, three months after that release, the Christopher Nolan spy thriller has returned to the top of the Australian box office, elbowing aside bodyswap horror comedy Freaky.

Cinemas recently reopened in the state of Victoria (which includes Melbourne), giving audiences there the chance to catch up with Tenet. The Warner Bros release surged back with Aus$586,000 ($428,000) in its 12thweekend of release (November 12-15), and was just behind Freaky for that session. Declining just 12% on its 13th weekend, Tenet regained the top spot.

Australia is the second market to welcome All My Life, following its UK release on October 23. Marc Meyers (My Friend Dahmer) directs Jessica Rothe and Harry Shum Jr in the romantic drama about a couple whose wedding plans are thrown off course when the groom is diagnosed with liver cancer. The film has grossed £143,000 ($191,000) in the UK so far.

The success of Tenet in Australia helped the film to an estimated $1.1m globally at the weekend, including $360,000 in North America. The international total is $299.2m, and Warner Bros expects the film to reach $300m this week internationally. The domestic total is $56.9m, and globally Tenet stands at $356m.

The Netherlands reopened cinemas at the weekend after its latest lockdown, but with a maximum capacity of 30 per screen. Universal’s Freaky was the top new title, opening in third place with $168,000 from 96 venues. Netherlands provided Freaky’s second-best result at the weekend, behind Australia with $254,000 (see above). In total, Freaky added $1.05m at the weekend in international markets (a decline of 56%), bringing the international total to $3.65m. With $5.59m in North America so far, the global total is $9.24m.

The Universal/Blumhouse production stars Kathryn Newton and Vince Vaughn as a high-school teen and a serial killer who swap bodies. Christopher Landon, whose previous films include entries in the Paranormal Activity and Happy Death Day franchises, directs.

Next for Freaky is release this week in South Korea – on Wednesday November 25. Brazil follows on December 10. Release in key European territories awaits the lifting of lockdowns.

‘The Witches’ boosted by Brazil opening

The fourth session for Warner Bros’ The Witches saw Robert Zemeckis’s Roald Dahl adaptation gross an estimated $1.2m – down from $2.0m in its third weekend of play. Total after 24 days is $15.1m.

The Witches premiered on HBO Max in the US, and is available via premium VoD in the UK.