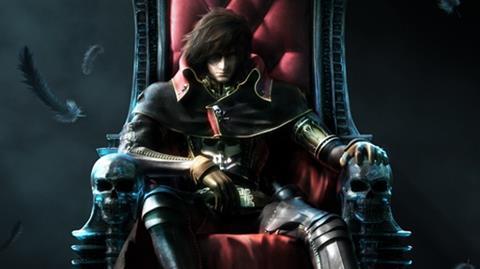 Harlock is billed as the biggest budget film that Toei has yet made.

GFM, run by Guy Collins, Fred Hedman and Michael Ryan, begins pre-sales in Cannes where it will be showing a 15 minute promo reel.

Almost all territories are available excluding Japan (where Toei will be overseeing a 400 to 500 screen Japanese release in September) and some Asian countries where Chou’s team had closed deals before GFM came on board.

“This is a real attempt for a high-end Japanese motion capture animation to find a significant position in US and international (markets),” Collins commented.

The producers are in the process of re-voicing the film with recognized US and European actors.

Collins said that the film had recently been screened to James Cameron in the US, who gave his seal of approval, praising the epic scope and imagination of the project.

In Cannes, GFM will also give a market debut to new eco-drama Bhopal: A Prayer For Rain, set against the backdrop of the Union Carbide disaster in 1984 and starring Kal Penn, Mischa Barton and Martin Sheen.

“That’s why we sent to see it (Bhopal: A Prayer For Rain) and we were blown away by it,” Collins commented of the film, directed by Ravi Kumar. The film is likely to be targeted at an autumn festival.

Lundgren will be in Cannes to meet distributors. Several territories have already been pre-sold, among them Germany (Telepool) and France (First Independent). The film was made as a China/UK coproduction.