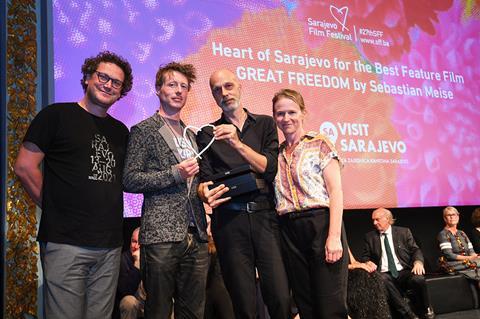 The 2021 winners were announced at an awards ceremony last night (August 20). The film received its world premiere at Cannes last month, where it played in Un Certain Regard and won the jury prize.

The love story tracks the persecution of homosexuality in Germany over the decades following the Second World War. It is the Austrian director’s second film following Still Life and is sold by The Match Factory. The award comes with a prize of €16,000 ($18,700).

Austria’s Georg Friedrich won Sarajevo’s best actor prize for his role in Great Freedom as an imprisoned convicted murderer who forms a relationship with his long-time cellmate, who has been jailed for being gay. Friedrich is known for winning the Berlinale’s Silver Bear in 2017 for his performance in Thomas Arslan’s Bright Nights.

Great Freedom also won the CICAE Award during the festival.

Serbia’s Milica Tomović picked up the best director award and €10,000 ($11,700) for her comedy drama Celts, which premiered in the Berlinale’s Panorama strand in March.

The best actress award was shared by the three leads of The Hill Where Lionesses Roar - Flaka Latifi, Era Balaj and Urate Shabani, who each made their feature debut in the Kosovo-set drama. French-Kosovan filmmaker Luàna Bajrami directed the feature, which premiered in Directors’ Fortnight at Cannes.

The festival previously awarded an honorary Heart of Sarajevo to director Wim Wenders.

The 27th Sarajevo Film Festival opened on August 13 with the world premiere of Danis Tanovic’s Not So Friendly Neighbourhood Affair and closes tonight with Dragan Bjelogrlic’s Serbian feature Toma.