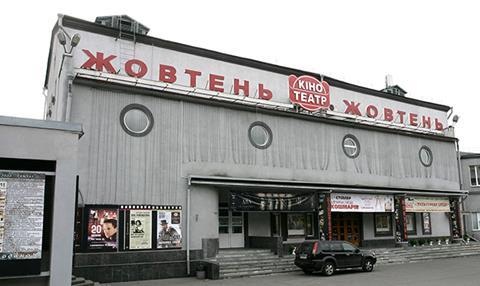 Kiev’s historic Zhovten cinema could open its doors again at this year’s Molodist Film Festival (October 24 - November 1), a year after it was the victim of an arson attack during a screening of the French film Summer Nights by Mario Fanani during the festival’s LGBT sidebar competition Sunny Bunny.

Speaking to Screen Daily at this week’s Odessa International Film Festival (OIFF), Molodist’s general director Andriy Khalpakhchi said: “We hope that we can have the cinema’s re-opened at our festival again because it is a very important venue for Molodist and for Kiev as the city’s oldest cinema.”

“At the time, I didn’t think that the Sunny Bunny was the reason for the attack. It was just a pretext for a lot of new businessmen who wanted the land where the cinema is situated in a very beautiful part of Kiev,¨ he recalled.

Soon after the arson attack, the Mayor of Kiev, the ex-boxer Vitaly Klitschko, announced that the city would fund the building’s reconstruction.

A foundation named Let’s Restore Together (Vidnovymo Razom) was established to raise funding to replace the fire damaged technical equipment and the cinema’s seating.

The fundraising campaign has included the Patron’s Chair initiative where individuals and companies can sponsor a seat bearing their name in the restored cinema.

In addition, donations have been collected at special fundraising events and in other Kiev cinemas as well through the sales of special tickets which give donors entrance to a future screening at the restored cinema  as well as further discounts.

“A lot of embassies have said that they want to help and the team of the Swiss film The Circle [which had also screened in the Sunny Bunny competition as the opening film] has been gathering donations in Switzerland for the Zhovten,¨ Khalpakhchi said.

OIFF’s executive producer Julia Sinkyevch added that festival in Odessa wanted to show solidarity for the cinema in Kiev by distributing information about the fundraising campaign to the festival’s guests by including a flyer in the festival bags this year.

Documentary filmmakers stretching from Sweden to Armenia are set to benefit from a new initiative, the Baltic to Black Sea Documentary Network (B2B DOC), which has received funding from the Swedish Agency for Cooperation and Development (SIDA).

Speaking at the Film Industry Office forum in Odessa today, Swedish filmmaker and the network’s initiator Alex Shiriaieff said that the Swedish government’s support would enable at least four co-production projects a year to receive between €5,000-€10,000 project development funding.

The co-productionns would be between producers from the Nordic or Baltic countries with colleagues from such countries as Belarus, Ukraine, Moldova, Georgia or Armenia.

The projects would be mentored by experienced West European producers throughout the whole development stage and training would be given in pitching strategies in preparation for presenting the projects at leading European pitching forums.