The Hobbit: The Battle of the Five Armies charges to top spot at UK box office 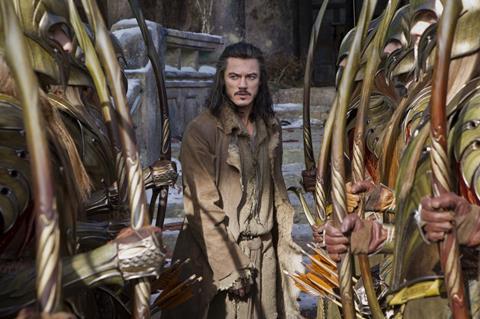 It may not have hit the commercial heights of The Lord of the Rings trilogy, but there’s no denying The Hobbit trilogy’s opening consistency as The Hobbit: The Battle of the Five Armies debuted top of the UK box office.

An Unexpected Journey fell almost 50% (excluding previews) in its second weekend to stand at $37.2m (£23.7m) and if The Battle of the Five Armies can match or better that, then it at least stands a chance of becoming The Hobbit trilogy’s best performer.

While it was prevented from a hat-trick of number one weekends, Paddington can console itself with the fact that it is now StudioCanal’s highest grossing release of all time in the UK.

With Christmas and school holidays just around the corner, Paddington is showing no signs of slowing down and will prove a formidable presence for upcoming family openers Night at the Museum: Secret of the Tomb and Annie.

Dropping around 50% with the arrival of The Hobbit, The Hunger Games: Mockingjay Part 1 recorded a $1.7m (£1.1m) fourth weekend.

This week sees saturation releases for Fox’s Night at the Museum: Secret of the Tomb and Universal’s Dumb and Dumber To.