Lionsgate’s fantasy-adventure becomes first film since Les Misérables to record four weeks at number one; Universal’s By the Sea flops with $38,000 (£24,770) from its 102 sites. 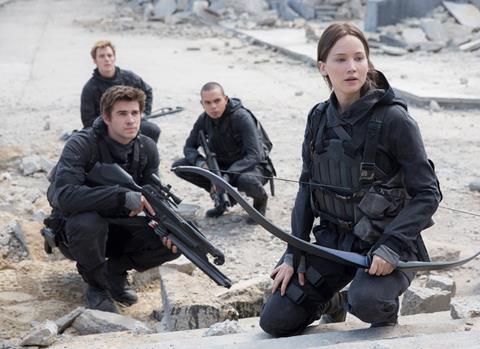 The Hunger Games: Mockingjay - Part 2 led an identical week-on-week top five at the UK box office as it retained top spot for the fourth straight week.

Lionsgate’s final chapter in the young adult franchise gathered an extra $1.95m (£1.29m) as it became the first film since Les Misérables in Jan-Feb 2013 to hold the number one spot for four weeks in a row.

Disney’s latest Pixar offering is now up to $10.2m (£6.75m) but will soon be competing for families at Christmas with The Peanuts Movie.

Though it narrowly missed out on the top spot, it did pull in more admissions than Mockingjay over Sat-Sun due to its younger audience and lower ticket price.

The latest James Bond mission will be hit by this week’s arrival of Star Wars: The Force Awakens, but still stands a great chance of overtaking Avatar’s $142.6m (£94m) as the UK’s second highest grossing film ever.

Fox’s potential awards contender is up to $8.2m (£5.43m) and in terms of Steven Spielberg outings in the UK, it has overtaken Munich’s $6.5m (£4.27m) with The Terminal and Lincoln next in its sights.

eOne’s festive offering is now up to $2.2m (£1.44m) and should enjoy another week of solid returns before fading post-Christmas.

Also for Universal, By the Sea opened with a weak $38,000 (£24,770) from its 102 sites resulting in a $369 (£243) site average. Given its minimal marketing and soft reviews, it’s perhaps unsurprising that the film has mimicked its low domestic performance.

Sisters started its UK run on Saturday [Dec 12], but the figures for Sat-Thurs will be added onto its opening this coming week and reported then.

This week sees the highly anticipated release for Disney’s Star Wars: The Force Awakens (opens Dec 17), with most other films understandably avoiding opening this weekend.