Comments come as 10 countries set to sign the Council of Europe’s revised co-production convention in Rotterdam. 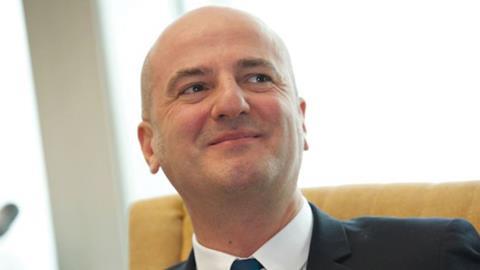 Roberto Olla (pictured), the head of European co-production fund Eurimages, has said that the UK’s rumoured re-joining of the fund following last year’s Brexit vote is unlikely to happen any time soon.

Speaking to Screen, Olla said that he believed the idea was “more wishful thinking than a real strategy,” adding that he has had “no contact” from the national bodies in the UK regarding the topic.

However, he also added that “the door is always open” as long as the UK remains in the Council of Europe, and that if the UK does consider re-joining Eurimages, then “the benefits are clear for everybody”.

Olla is travelling to Rotterdam today to attend the signing of the revised Council of Europe Convention on Cinematographic Co-Production, which is taking place at International Film Festival Rotterdam (IFFR) tomorrow (Jan 30).

There will be representatives from 10 countries - Netherlands, Greece, Italy, Luxembourg, Malta, Norway, Portugal, Serbia, Slovakia and Slovenia - attending the signing of the treaty, which is one of the key tools for co-production in Europe. Details of the overhaul of the convention were originally revealed to Screen in March last year.

Speaking to Screen, Doreen Boonekamp, director of the Netherlands Film Fund (hosting the event here in Rotterdam), talked up the need for the updated convention.

“Encouraging international co-production is one of the core priorities of the Netherlands Film Fund. We are a small country with a strong desire to collaborate because we believe that international co-production is vital in bringing creative, technical and business talents together from different countries to share stories, exchange expertise, and to reach out to audiences across all borders,” she said.

The primary objective will be “to safeguard creation and freedom of expression and defend diversity in film”, a press release put out by the Council of Europe stated.

Asked whether that freedom and diversity felt even more important today, given US president Donald Trump’s recent signing of an executive order suspending the ability of people from seven Muslim-majority countries to travel to the US, Olla commented that “facilitating freedom of expression and ideas is even more important today than it has been in the past”.

“We should never take for granted the freedom we have enjoyed so far,” he added.

Olla believes the updates to the treaty will make the co-production process simpler for European filmmakers as well as those from further afield.

“Hopefully it will facilitate the work of filmmakers and producers in general, with more simple rules that are the same for everybody. Producers should be able to focus on producing rather than satisfying administrative rules,” commented Olla.

One of the key revisions will see the treaty opened up to non-European countries for the first time. This could make it easier for countries such as Canada, Argentina, Brazil and Mexico, which already work closely with Europe, to co-produce with European partners.

Further to that, the revisions will account for the “digital revolution” that has taken place in the film industry since the initial convention was drawn-up, said Olla.

The original convention, written up in 1992, was signed by 43 countries.

Olla expects all 47 of the current Council of Europe member states to eventually sign the revised version, though he adds that due to varying bureaucratic processes, some will take longer than others. He expects that the majority of those countries will sign within the next 12 months.

A full explanatory report on the revised convention is available here.