Speakers from Curzon, EFM, and the Nostradamus project discussed how distribution could catch up with other areas of the industry. 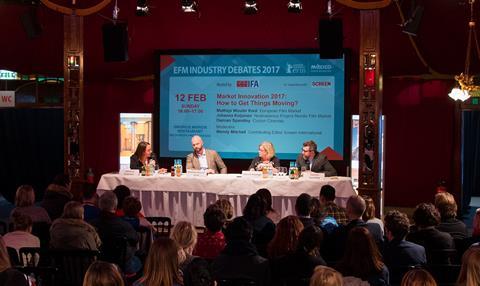 A panel of executives debated the need for distribution innovation during a European Film Market (EFM) session this week, hosted by Screen.

Koljonen argued that a significant increase in film production has not been matched by similar advances in distribution models. She added this will be increasingly necessary for independent projects if a new era of deregulation results in the existing media giants becoming even larger.

“There’s nobody in that marketplace (of big media giants) whose responsibility it is to carry the kinds of films that I think we’re all passionate about at this festival,” Koljonen said. “That means that we need to come up with a solution ourselves.”

“We would like to see more distributors coming in with us and doing the day-and-date strategy – it feels like a barrier now, but that’s where the opportunity is,” he said.

“The thing about Curzon Home Cinema is that 60% of our views come from outside London. That problem in the UK is about access because if you live in a small regional town it’s very unlikely these movies will be available at the local cinema.”

Knol discussed the need within the film industry for increased trial and error, suggesting there should be more freedom to make mistakes in the search for innovation.

Propellor Film Tech Hub, which launched at this year’s International Film Festival Rotterdam (IFFR) and is hosting an event here in Berlin, is exploring ways of using new technology to boost and develop all areas of the film industry.

“Propellor is focussing on business models and we want to invite people from the film industry, but I’d say 50% of the people we’d like to invite are people who are working for technology companies and start-up firms, or who have pushed innovation,” Knol said.