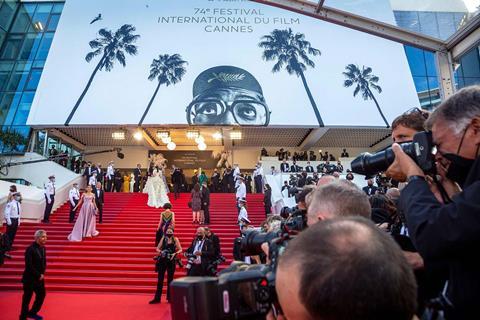 As the Cannes Film Festival moves into its last two days, international attendees reflected on a pandemic-era event that has required them to grapple with the logistics of 48-hourly Covid-19 tests, rumours of a virus cluster in the early days of the festival and concerns over the lack of mask-wearing, which was tightened up as the event progressed.

Sales agents expressed mixed views on how much business has been done but all said they were happy to be back. Those representing titles in official selection were generally upbeat, suggesting the lower footfall in the market and up and down the Croisette did not necessarily make for less business.

Buzzy titles in the parallel sections also fared well. However, a squeeze on reviews due to the bumper offering of some 120 films across all the sections and fewer critics on the ground overall was problematic for smaller, more fragile films as sales agents struggled to garner interest without the boost of media attention. (For the record, Screen’s team of critics on the ground, led by reviews editor and chief film critic Fionnuala Halligan, reviewed 100 of those titles.)

“There may be fewer attendees, but all the good European and US buyers are here, and we’ve been in contact with the rest of the world online since the Pre-Cannes Screenings,” she said.

Janina Vilsmaier, director of sales at Protagonist Pictures, said the 2021 festival and market had proved the importance of face-to-face meetings. “For us at Protagonist, the most important thing is the relationship with our buyers which is always best maintained in person,” she said. “We had an extremely productive festival – with two world premieres for The Souvenir: Part II in Directors’ Fortnight and The Innocents in Un Certain Regard.

”We prepared for the festival to have lower attendance than usual and were pleasantly surprised about how many buyers did end up making it to Cannes.”

Maya Amsellem, managing director at London-based WestEnd Films, said she had begun most of her buyer conversations at the online Pre-Cannes Screenings, having not been sure until the last minute if the company would attend in person.

”It was nice to see some buyers in person and continue some of the conversations that started during the online market,” she said, explaining that she had never expected all buyers to attend due to the Covid restrictions and the timing of the festival at the beginning of the summer holidays.

Léo Teste, director of sales and distribution at UK-based Film Constellation, expressed his pleasure at meeting people face-to-face again. The company was at the market with Taneli Mustonen’s English-language horror picture The Twin and also screened Cannes 2020 label selection John And The Hole with the director Pascual Sisto accompanying to the market.

“All our top US and European buyers were in attendance and active,” he said. “Some distributors are still stacked with films they are yet to release, but we were pleased with the overall bustling activity on the Croisette and the willingness for deal-making. The sheer delight to reconnect in person after months of endless Zoom meetings was palpable from the start of the festival and market.”

Film Constellation was among just a handful of international sales companies making the trip without any Cannes festival titles on their slates. Andreas Rothbauer at Germany’s Picture Tree International also attended with a slate of market titles, working out of a mini-booth in the Riveria section of the market rather than travelling with his entire team. He acknowledged most buyers on the ground were focused mainly on Cannes titles but said the trip had been fruitful nonetheless. The company held a market screening of Sonke Wortmann’s comedy Contra, which will be released in German-speaking territories by Constantin in the autumn.

“The main reason we did it was that, for the time being, we are not allowed to send screening links. It was one of the few chances where we could screen it earlier.”

The company also screened animated feature Snotty Boy, fresh from its premiere at Annecy in June. Attendance for the screenings was “medium-low” but not disastrous, said Rothbauer. “It was good to talk to people again and to have a little more time for meetings… to have that human factor in there again,” he explained.

Maren Kroymann, CEO of Berlin-based M-Appeal, was also working with market titles, topped by The Swimmer and The Book Of Delights. She was upbeat about her experiences in Cannes but suggested the Marché du Film could have lowered its prices, given there were fewer attendees.

“The booth was not cheap and the outcome financially was less than usual because there was less attendance,” she said. “It would have been nice to have a different price tariff. Everything was the same as if it was a usual Cannes. That’s not really justified because the outcome is not the same if you meet one-third of the people. On the human level and on the cinema level, it was amazing and important for everyone there. But the business level, the pricing and the impact of the market…the money side was not ideal.”

Not everything was face-to-face, with many sellers spending chunks of time on Zoom with buyers who did not make the trip.

“I’ve been spending my mornings on Zoom talking to Asia and then getting to see people in the afternoon,” said Nicolas Brigaud-Robert, co-head of Paris-based Playtime, whose Cannes titles included Palme d’Or contenders Paris, 13th District and Everything Went Fine.

Brigaud-Robert was heartened to see the presence of key US buyers at the market after fears that few would make the transatlantic trip.

On the buyers’ side, those who made the journey were also happy to be back although they were more on the frontline of mixing with people at screenings, which caused concerns for some.

“It’s been very fruitful. We have offers out on a couple of films and there was some important deal-making outside of the festival films that was made easier by in-person meetings,” said Ed Caffrey, head of acquisitions at UK and Ireland distributor Vertigo Films. “From the distributors’ side, it feels like there is the same energy and excitement about picking up films and getting them out theatrically, but we still don’t know what will happen with the virus and how that will impact audiences in the next 12 months.”

Picturehouse Entertainment acquisitions manager Paul Ridd enjoyed seeing the response to Joanna Hogg’s The Souvenir: Part II, which the company acquired UK and Ireland rights to months ago. “It was particularly satisfying to have all the incredible raves come in early doors, everyone seems to love Joanna’s film as much as we do. The only bittersweet note being that now, having seen all the films in Competition, it definitely should have been in there rather than the Quinzaine,” he said.

Ridd added that he had been unfazed by the Covid-19 measures. “Once we got into the swing of testing every two days and took our own responsibility for how we handled ourselves, it all became very natural and we felt safe.”

In spite of the uncertainty in the backdrop, Paillard expects the market to start returning to its usual size and format in 2022. He says they are still assessing what aspect of this hybrid edition will be maintained in the future.

“It remains to be seen whether we’ll continue the online screenings or the satellite screenings we did throughout the world. We’ll discuss it with the sales companies. But I think we’ve all understood that being together is important, whether that’s for sales or for networking,” said the Marche’s executive director.