'Journey To The West: The Demons Strike Back' travels to opening day record (update) 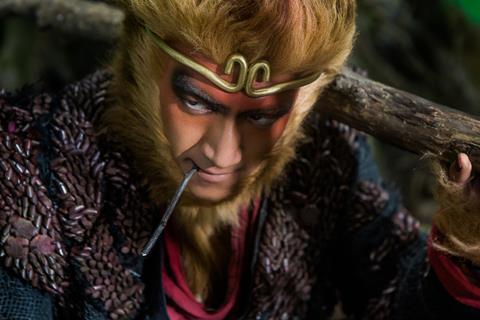 With six titles competing for local audiences on Chinese New Year yesterday (January 28), Journey To The West: The Demons Strike Back won the battle.

Tsui Hark’s fantasy sequel recorded the biggest-ever day for a local Chinese title and the second biggest of all time with an estimated $52.5m in China, topping the Chinese record set by The Mermaid last year and only behind Furious 7.

Estimates for the two-day weekend aren’t yet available, but from 390 IMAX screens, it took $7.4m, with $4.5m coming from its bumper first day. That marks the best-ever day for a local language title and the third biggest of all time, behind Warcraft and Furious 7.

According to comScore, Journey To The West: The Demons Strike Back posted a huge estimated $85m bow from its seven territories.

Resident Evil is now the biggest video game based film franchise of all time as it crossed the $1bn mark at the worldwide box office across its six outings.

Its latest outing, Resident Evil: The Final Chapter was the number one Hollywood film at the overseas box office this weekend with $28.3m from its 44 markets, including $2.9m from Constantin Film markets, for $64.5m to date.

From its 495 IMAX locations worldwide, the horror sequel grossed $3.2m. It opens in Spain and the UK on February 3.

T2 Trainspotting arrived in the UK in style this weekend with $6.3m from 1,000 screens, marking the third highest opening ever for an 18-rated film in the market. It expands its global rollout following its Berlin screening on February 10.

Currently playing in 55 markets, Passengers travelled to a further $4.3m for $192.7m overseas, including $13.1m from its Village Roadshow markets.

Wendy arrived in four markets, including Germany, for a debut of $1.3m from its 656 screens.

Malaysia was the best new opener with a chart-topping $2.2m, while it posted bows of $568k and $513k in Turkey and Vietnam, respectively. Its next major openings come in South Korea on February 9 and China on February 10.

It continued to dazzle in the UK, dropping only 29% in its third weekend and reaching $25.8m, making it the leading overseas market. In South Korea, it’s now Lionsgate’s highest-grossing film ever with $22.3m.

Illumination and Universal Pictures’ latest hit animation enjoyed a show-stopping debut of $12.2m, including previews, in the UK and also landed top of the chart in France with a preview-boosted $5m.

Amblin Entertainment and Walden Media’s A Dog’s Purpose opened in seven overseas territories day-and-date with North America for a $3.4m debut, led by $1.8m in Mexico to chart second.

Manchester By The Sea has grossed an early $3.9m in its Universal territories and opens in Australia and Spain, among others, next weekend.

The animation also opened with $600k in Taiwan and became the biggest ever Disney Animation release in New Zealand. It lands in Denmark, Norway and Sweden next weekend, with a release in Japan to come on March 10.

Doctor Strange opened in its final international market of Japan and conjured up a chart-topping $4.5m, a debut ahead of the likes of Ant-Man and Guardians Of The Galaxy. Overseas, it has now amassed $433m.

Having opened in all territories, Rogue One: A Star Wars Story took $3.8m from its 32 territories for $510m overseas and $1.03bn worldwide.

Posting decent openings in Taiwan ($446k) and New Zealand ($293k), Hidden Figures grossed $1.5m from its 11 markets for an early $2.5m. The Best Picture nominee opens in 18 markets next weekend, including Germany and Mexico.

The Philippines recorded a chart-topping $1.3m bow from its 176 sites, while France fell 43% with a $807k third weekend for $5.3m. It opens next weekend in Bulgaria, India, Latvia, Mexico, Netherlands, Ukraine and Vietnam.

UPDATE: Collateral Beauty grossed $2.7m from its 51 territories for $49.1m to date, after opening in Brazil with $685k from its 255 screens. It releases in Japan on February 25.

The Accountant has accumulated $67m.