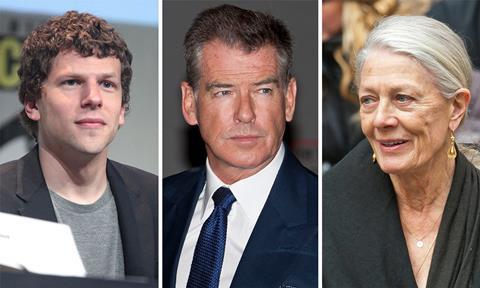 Peter Webber will direct his second film based on a renowned work of art after 2003’s Girl With A Pearl Earring, named after the painting by 17th century Dutch master Johannes Vermeer.

The Medusa stars Eisenberg as Theodore Gericault, the early 19th century pioneer of the French Romantic movement whose masterpiece The Raft Of The Medusa was inspired by the sinking of a French frigate.

Survivors of the wreck spoke of incompetence and cannibalism and the painting stirred anti-royalist sentiment at the time of King Louis XVIII’s rule.

Brosnan will portray Gericault’s uncle Caruel, the artist’s nemesis who is hell-bent on ruining him, while Redgrave plays the painter’s anti-royalist innkeeper.

Sophia Al-Maria adapted the screenplay from Jonathan Miles’s book The Wreck Of The Medusa.

Production is scheduled to begin by early autumn and additional casting are expected to be announced in due course.

“Before the sinking of the Titanic, the story of The Medusa was the greatest sea disaster people had heard of,” De Laurentiis said. “I was captivated the first time I saw Gericault’s painting of it in the Louvre and for the next twenty years I wanted to see it become a film.

“So, it was a joy to discover that Peter Webber had conceived of a way to tell the story from the painter’s perspective that made it emotional and poignant within the epic scope of the tragedy.”