Two of the directors in the international Oscar race – Juho Kuosmanen of Finnish entry Compartment No. 6 and Khadar Ayderus Ahmed of The Gravedigger’s Wife, Somalia’s first ever submission – have collaborated on the Finnish short-form episodic series Zone B, which will have its world premiere at the Red Sea International Film Festival on December 9. 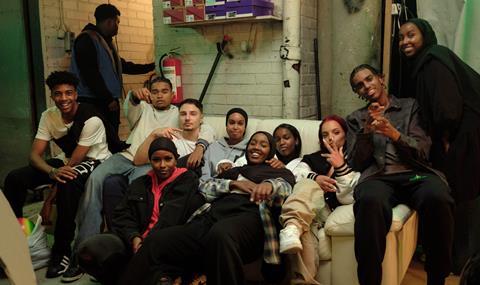 The team, which also includes rising talent Siiri Halko, has a long history together – Kuosmanen directed his first professional short film, Citizens, based on Ahmed’s script, back in 2008. That short, which won an award at Locarno, also starred Omar Abdi, who takes the lead role in The Gravedigger’s Wife and also collaborates on the new series.

After the group made Citizens together, Kuosmanen and Ahmed wanted to find a project that could highlight Adbi’s work as a youth worker in multicultural East Helsinki.

“We tried to come up with a fictional story that would star Omar,” says Jussi Rantamaki, who produces Zone B at Aamu Film Company, alongside Emilia Haukka. “Then at some point with these young people we met in East Helsinki through Omar, we had some workshops [in 2020] and realised the story has to come from them, it has to take place in their world.”

Abdi, who is of Somali heritage, makes an appearance in Zone B but was even more crucial behind the scenes, helping the team cast the teenagers and young adults, all first-time actors, who take the lead roles.

The series was written in spring of this year, and shot in the summer. Ahmed outlined the story arc for the first season and wrote and directed two of the eight 10-minute episodes, while Kuosmanen and Halko split writing and directing duties on the remaining six. (Halko, who was introduced to the group by Abdi, comes from East Helsinki and is about to graduate from the ELO Film School in Helsinki; Aamu is in talks with her about future projects.)

“It was very important for me to give the youth from East Helsinki their own voice,” Ahmed tells Screen. “We did not write a script first and then cast. We gathered a group of Finnish kids between 16 and 24 from different cultural backgrounds, hung out with them and once we felt like we had gotten to know them well, we started creating something that was very close to their lives and their hobbies. We had them involved in the process from the beginning.”

Zone B’s story arc follows a group of friends whose loyalties are tested when two of the group participate in an open-mic competition as a rap duo which ends up becoming a big deal.

Ahmed is looking forward to screening Zone B (which takes its titles from the transport zone for East Helsinki) to an audience for the first time at RSIFF.

“I think it’ll be exciting to show the TV series in Saudi Arabia because the show has universal themes that kids from anywhere can either understand or relate to: sports, music, drama,” he says.

Finnish public broadcaster YLE, which financed Zone B, will broadcast the series from early February and Rantamaki hopes it will greenlight further seasons. He adds that while Aamu, which also produced Compartment No. 6, plans to stay focused on cinematic works, the company is open to further TV projects for stories that fit better within an episodic format.

“With this short format, we don’t have to push the drama that much,” he says. “It’s more about enjoying these kids’ way of life and making it funny.”