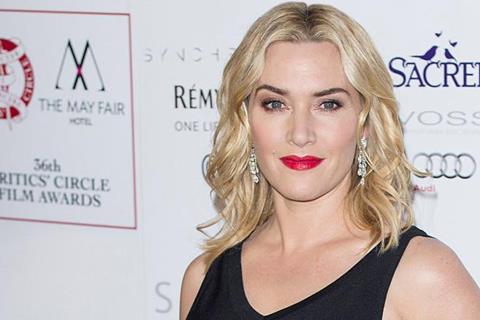 Kate Winslet is set to be honoured at next month’s London Critics’ Circle Film Awards with The Dilys Powell Award for Excellence in Film.

She will receive the award at the ceremony on 28 January at The May Fair Hotel.

Winslet made her screen debut in 1991’s Dark Season, before going on to star in Peter Jackson’s 1994 film Heavenly Creatures.

Her big break came in James Cameron’s 1997 epic Titanic, and she has gone on to receive seven Oscar nominations – winning once for 2008’s The Reader.

The actress has also been nominated for eight BAFTAs, winning three times, and was appointed Commander of the Order of the British Empire (CBE) in 2012.

Most recently, she starred in 2015’s Steve Jobs and appeared this year in Woody Allen’s film Wonder Wheel. She is also set to star in Cameron’s upcoming Avatar sequel.

Nominations for the 38th London Critics’ Circle Film Awards will be announced on 19 December by Thomas Brodie-Sangster (Game of Thrones) and Morfydd Clark (The Falling).

The 38th London Critics’ Circle Film Awards will be held on Sunday 28th January 2018, and will be hosted once again by Alice Lowe and Steve Oram.