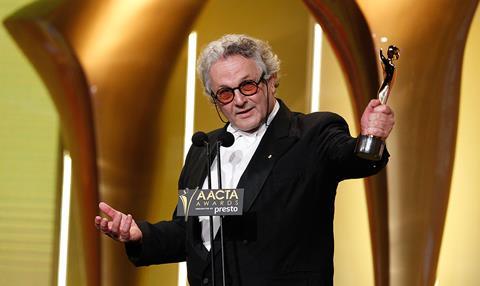 Her onscreen mum, Judy Davis, was the odds-on favourite to win Best Supporting Actress, which she did. In another acting gong for The Dressmaker, Hugo Weaving seemed as surprised as everyone else when his name was called to the stage of Sydney’s The Star casino complex.

In other awards, Cate Blanchett received a special industry achievement award for her services to the Australian screen industry.

The multiple award winner was tearful as she accepted the award from friends and collaborators, Gillian Armstrong, Richard Roxburgh and Hugo Weaving, after a video tribute from Ridley Scott, Ron Howard, Martin Scorsese and Todd Haynes.

Blanchett is set to relocate to the U.S. with her family but spoke of the difficulty Gillian Armstrong faced in getting studio backing to cast Blanchett opposite Ralph Fiennes, in 1997’s Oscar And Lucinda.

In accepting the Best Film award, Miller spoke of the “gravitational pull back to this country”, which brings so many of Australia’s internationally recognised cast and crew home to keep working on local productions.

The fourth film in the Mad Max franchise was produced and partly shot in Australia, and the blockbuster’s May release was a major fillip to the domestic box office.

It hasn’t been the only one. 2015 has been the best year for Australian cinema since 2001 (when Baz Luhrmann’s Moulin Rouge was the major local drawcard). Moorhouse’s The Dressmaker, which is still showing in cinemas, is only $4 million shy of Mad Max: Fury Road’s $22m box office receipts.

The event was the 5th AACTA Award ceremony, after the Australian Academy of Cinema and Television Arts replaced the AFI (Australian Film Institute) Awards.