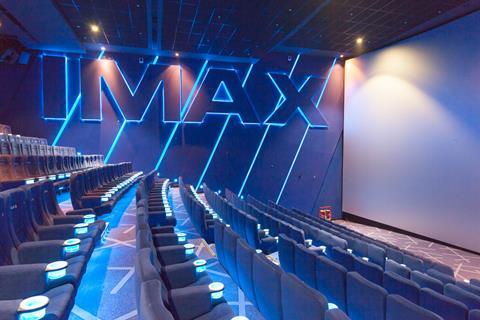 Former Paramount head of worldwide marketing and distribution Megan Colligan has been named president of IMAX Entertainment and executive vice-president of IMAX Corporation as Greg Foster prepares to leave the company.

Colligan will report to IMAX Corp CEO Rich Gelfond and will start on February 19, 2019, following a consulting period.

She will oversee IMAX’s global entertainment division and will help grow the company’s worldwide box office and cultivate IMAX’s strategic relationships and partnerships in the entertainment industry.

In addition she will oversee IMAX’s original content development, production and distribution and alternative content strategy. She is expected to play a key role in shaping IMAX’s film fund strategies and develop partnerships in the emerging streaming marketplace.

IMAX Corp said that “as has been anticipated”, Foster will exit from his role as CEO of IMAX Entertainment and senior executive vice-president of IMAX Corp when his contract concludes at the end of the year.

“Given Megan’s extensive experience in the entertainment industry, she has a unique perspective on how it is evolving and what IMAX can do to grow our global entertainment business in new and innovative ways,” said Gelfond. “Her strong relationships with film studios, exhibitors, filmmakers and talent around the world will help us take our already robust partnerships to the next level and build exciting new ones.

“I’d like to thank Greg for his dedication and commitment to building IMAX’s blockbuster film business and contributing to our overall success. He is a great friend who has worked tirelessly for IMAX and I’m grateful for his enormous contributions over nearly two decades. His relentless drive to build relationships across the industry in both domestic and international markets with the finest filmmakers, studios and exhibitors was critical in helping IMAX become the global brand that audiences equate with the best movie-going experience on the planet.”

Foster said: “After nearly 18 years at IMAX, I leave extremely proud of what we’ve built and accomplished. I want to do everything possible to guarantee the continued prosperity of a company I have known and loved for such a long time.

“I can’t think of anyone better to hand the baton to than Megan. We’ve been friends and colleagues for many years and she’s a professional and talented film executive. I look forward to working with Megan to ensure a smooth transition of responsibilties. I’m leaving the company I helped build in excellent hands. Rich and everyone at IMAX will always be part of the extended Foster Family.”

“One of the many things that attracted me to IMAX is the strong spirit of entrepreneurship and innovation the company has long been dedicated to since the very beginning,” said Colligan. “We’re at a really interesting time in the content business and IMAX is uniquely positioned to help drive the future of our industry by leading the way with technological innovation, creative problem solving, and smart, thoughtful experimentation. I’m excited to be to be a part of a Company, led by Rich, that is at the forefront of advancement.”

Colligan was at Paramount from 2006-17, serving most recently as worldwide president of marketing and distribution from 2014-2017. She spearheaded campaigns on franchises such as Transformers, Anchorman, Terminator, Mission: Impossible, and Star Trek, and launched the Paranormal Activity franchise.