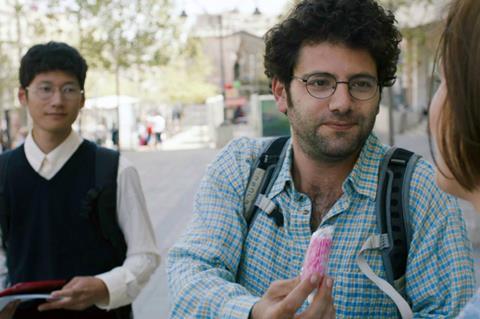 Born In Jerusalem And Still Alive

Neil Friedman’s Menemsha Films has picked up North American rights from Go2films to the Israeli film Born In Jerusalem And Still Alive.

The dark comedy directed by David Ofek and Yossi Atia received its world premiere at the Jerusalem Film Festival in July, where it won the best first film award.

Atia stars in Born In Jerusalem And Still Alive, which follows a man’s journey to overcome his fear of terror attacks as he becomes a tour of terror attack sites along Jerusalem’s Jaffa Street in an effort to break free from his trauma.

“We believe that Yossi Atia, the filmmaker and star, is an upcoming new talent in Israeli cinema and we look forward to working with Yossi and his team and Hedva of Go2Films on the film’s release in North America in the first half of 2020,” said Menemsha chief Neil Friedman, who brokered the deal alongside Heidi Oshin with Go2films managing director Hedva Goldsmidt.

“Born In Jerusalem And Still Alive is an homage to Israeli society through a comedic lens and we look forward to working with Menemsha Films on this film’s distribution,” said Goldsmidt.