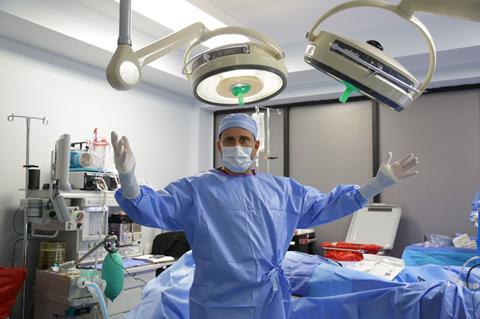 They Call Me Dr. Miami

After cancelling its 37th edition midway last month due to the coronavirus pandemic, Miami Film Festival will present the online world premiere of the Canadian documentary They Call Me Dr. Miami on April 25 and 26.

Jean-Simon Chartier’s film examines the life of high-profile US surgeon Dr. Michael Salzhauer, whose livestreams of plastic surgery procedures have earned him notoriety and a following of millions.

The film will be made available worldwide for a 48-hour period on the festival’s Vimeo VOD channel.

On April 26 the festival will host an Instagram Live Q&A session on its channel @miamifilm with Dr. Salzhauer hosted by Miami Film Festival programmer Lauren Cohen.

Speaking on the inaugural Screen Talk webinar last week, festival director Jaie Laplante proposed films that receive online world premieres might still get a premiere in a “theatrical cinematic setting” down the line.

In a statement released on Tuesday (14), Laplante said: “Life during Safer-At-Home orders presents us with a challenge to find creative new ways to achieve our mission of connecting art with audiences.

“Our excitement to premiere Jean-Simon Chartier’s portrait of one of Miami’s most colorful and unique personalities has remained undiminished, and we are thrilled to be able to present the film and a live, interaction discussion with Dr. Miami via online platforms.”

“There is no doubt Dr. Miami is a polarising figure – he not only acts as an entry point into the once taboo subject of plastic surgery, but his relentless pursuit of social media fame and pop culture fandom will shock many. The story deepens however when you explore the doctor’s personal life and the questions it raises about the work and how he does it. It is an entertaining, eye-opening look at a unique individual in the ‘golden age of sharing.”

Miami Film Festival opened on March 6 and cancelled on March 12 with three days left to run.