Live cinema broadcast has generated more than $1m at the UK box office to date. 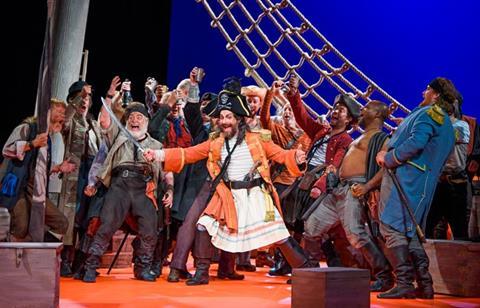 A live cinema broadcast of Mike Leigh’s English National Opera debut The Pirates of Penzance has become the highest-grossing live event in cinemas and other venues across the UK.

To date the UK box office has exceeded $1m, beating all previous UK opera event cinema releases. The figure is set to increase with encore performances and international screenings.

The previous record for an opera was the Metropolitan Opera’s broadcast of Franz Lehar’s The Merry Widow earlier this year, which took $770,000 in total.

Alternative content producer/distributor Altive Media worked alongside English National Opera to bring The Pirates of Penzance to an audience of more than 40,000 people on the big screen in multi-camera HD on May 19.

Other forthcoming live broadcasters include The Barber of Seville, La Bohème, The Mikado and The Magic Flute.