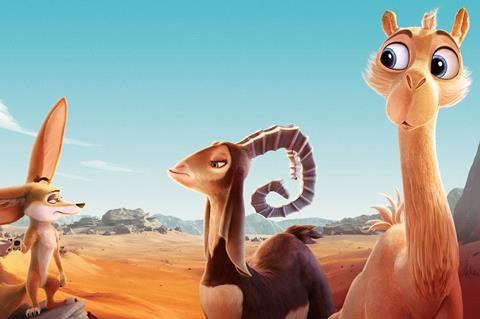 Produced by Berlin-based production house MovieBrats Pictures, Hump follows a young camel as it traverses the Arabian Desert with two companions, an ill-tempered goat and an overconfident desert fox, in order to reunite with its owner and best friend, a 10-year-old Bedouin boy.

UTA is putting together an A-list voice cast for the film, which is currently in pre-production and has already been pre-sold to Portugal, Bulgaria, Poland, Ukraine, former Yugoslavia, Israel, Middle East, South Korea and Vietnam.

Vision Film is planning a theatrical release for the film in more than 10,000 theatres across China. “We are thrilled to work together with Odin’s Eye Entertainment and introduce Hump, this great film, to Chinese audiences. When we finished reading the script of Hump, we found it both funny but moving, much like Madagascar,” said Qi.

Gallery added: “Hump is a genuine four quadrant, rollicking musical adventure and all of us here at Odin’s Eye are very excited that Vision Film Entertainment share our enthusiasm. We know Chinese families, and indeed families everywhere, will respond to Hump’s vivid visual flair and positive values.”