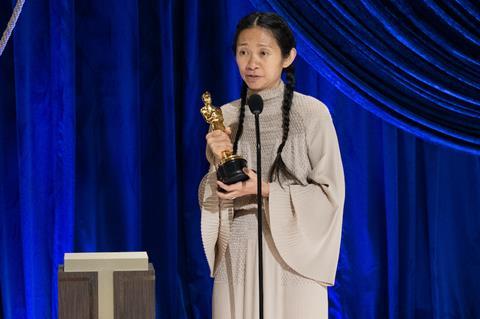 Chloé Zhao at the 93rd Oscars

Oscar favourite Nomadland and UK talent triumphed at the 93rd Academy Awards on Sunday (April 25) as the most protracted season, and one shaped by the pandemic, came to an end.

Searchlight Pictures’ Nomadland was named best picture and also scored wins for Asian American best director Chloé Zhao – who became the first woman of colour and only the second woman in history to win the award after Kathryn Bigelow for The Hurt Locker in 2010 – and lead actress Frances McDormand, who competed in a particularly close contest.

McDormand fought off stiff competition from Viola Davis for Ma Rainey’s Black Bottom and Carey Mulligan for Promising Young Woman to claim her third career lead actress Oscar (after Three Billboards Outside Ebbing, Missouri and Fargo) and gave a brief speech for her individual award. She rounded out the best picture acceptance speech (she was one of the producers) by urging audiences to return to cinemas to watch nominated films before delivering a wolf howl in tribute to the film’s late production sound mixer Michael Wolf Snyder, who died recently aged 35.

The pandemic forced the Academy to push back the show by some two months, and this season removed eligibility criteria requiring films to play at a commercial cinema. The studios largely postponed their releases due to theatre closures, and while that removed a large swath of potential contenders, the quality from smaller films and streamer heavyweights was high.

British talent enjoyed a strong night at the ceremony, a relaxed and elegant affair that played out amid exacting yet unobtrusive Covid-19 protocols, mostly in a converted hall in the working art deco Union Station in Los Angeles.

Anthony Hopkins delivered one of the few upsets of the night when he became the oldest lead actor winner at the age of 83 for The Father, produced and financed by Film4 and Embankment Films among others and distributed in the US by Sony Pictures Classics. The award, the last to be handed out on the night in a break from tradition that almost always sees the show climax with the best picture announcement, had been expected to go to the late Chadwick Boseman for his performance in Ma Rainey’s Black Bottom.

The ceremony ended abruptly as Hopkins, in Wales at the time of the ceremony, did not deliver a speech by satellite hook-up as others who were not present at Union Station had done. It was his second lead actor Academy Award after The Silence Of The Lambs in 1992.

There was also joy for Christopher Hampton, the Portugal-born UK screenwriter, playwright and filmmaker who co-wrote adapted screenplay winner The Father with writer-director Florian Zeller.

Thomas Vinterberg’s Danish frontrunner Another Round – released in the US via Samuel Goldwyn Films – won the international feature award and elicited a memorably dignified speech from the writer-director, who dedicated the Oscar to his daughter Ida who died aged 19 in a car accident early on in production. It is the fourth Danish film to win after In A Better World, Babette’s Feast and Pelle The Conqueror.

There was a popular win for South Korean legend Yuh-Jung Youn in the best supporting actress category for Plan B and A24’s Minari. Youn had been the frontrunner after wins from SAG, Bafta and the Spirit Awards, and became the first South Korean actress to win an Oscar.

Disney had a big night collecting top awards. Besides the wins for Searchlight’s Nomadland, Pixar’s Soul was named best animated feature in a category where it faced stiff competition from Cartoon Saloon’s Wolfwalkers, while Pete Docter and Dana Murray’s film also took the statuette for best score composed by Trent Reznor, Atticus Finch and Jon Batiste.

Netflix enjoyed a strong night even though the main prize continued to elude it. Ma Rainey’s Black Bottom was a strong contender for the two lead acting awards and in the end had to settle for two early prizes in the ceremony with wins for costume design (Ann Roth), and makeup and hairstyling (Sergio Lopez-Rivera, Mia Neal, Jamika Wilson).

In other craft and technical categories, Netflix’s Mank earned cinematography (Erik Messerschmidt, slightly upsetting the form guide that had Joshua James Richards the favourite for Nomadland) and production design (Donald Graham Burt, Jan Pascale) awards, which were its only two statuettes after starting the night on a field-leading 10 nominations.

Besides Union Station, the heavily slimmed-down Oscars featured a little screen time for the Dolby Theatre, where the Academy Awards have typically taken place in recent years. Bryan Cranston stood in an empty venue to present a Jean Hersholt Humanitarian Award to the Motion Picture & Television Fund; Tyler Perry was at the Union Station ceremony to receive his Jean Hersholt Humanitarian Award.

As promised by the ceremony’s producers Steven Soderbergh, Stacey Sher and Jesse Collins, there were satellite links with international locations including BFI Southbank in London, Paris, Seoul and Sydney.