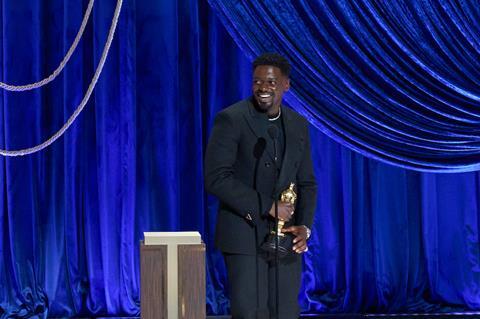 Anthony Hopkins won best actor for The Father in a strong night for British talent and films at the 93rd Oscars.

Hopkins’ victory was one of the night’s notable upsets, pipping the late Chadwick Boseman for his role in Ma Rainey’s Black Bottom.

As with his victory at the Baftas earlier this month, Hopkins did not accept his award either in-person or virtually; the actor is currently in his hometown in Wales, with the award given after 4am in that timezone.

It is Hopkins’ second Academy Award; he previously won best actor in 1992 for Silence Of The Lambs.

Daniel Kaluuya was a fellow British winner, receiving best supporting actor for Judas And The Black Messiah. He was previously nominated for best actor for Get Out in 2018.

London-born Emerald Fennell won one of the first awards of the night in best original screenplay for Promising Young Woman, her feature film debut as writer and director; with Portuguese-British playwright Christopher Hampton winning best adapted screenplay alongside Florian Zeller for The Father.

“What an amazing place to come from, and so supportive of the arts,” said Fennell of the UK, in the press conference following her win. ”There are so many incredibly talented people and I think it’s getting better and better. It’s just so exciting this year to see so many British people succeed and in such a huge international forum. So yeah, I feel very proud and grateful.”

Promising Young Woman is produced by LuckyChap Entertainment from the UK, with UK-born producers Josey McNamara and Tom Ackerley; while The Father is produced by David Parfitt for his UK company Trademark Films.