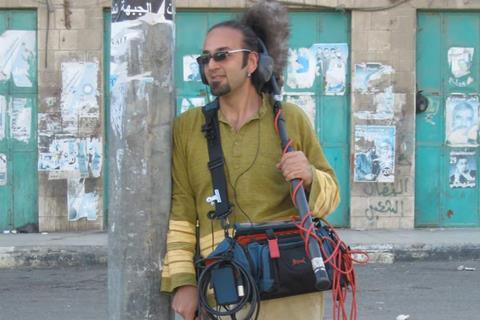 The Palestinian film world has paid to tribute to prominent sound engineer Raja Dubayah, who has died at the age of 46 after a short illness.

Dubayah worked on many of the major Palestinian feature productions of the last 15 years including Annemarie Jacir’s When I Saw You and Wajib; Hany Abu-Assad’s Omar and The Idol; Mai Masri’s 3000 Nights; and Shady Srour’s Nazareth-set comedy Holy Air.

A rarity in the under-resourced Palestinian filmmaking scene, where it is difficult for aspiring technicians to get the training and experience required to rise to key crew positions, Dubayah began his artistic career as a composer, writer and bass player in the Palestinian rock band Samana in 1994 and later went on to found the band Nashaz in 2006.

Nazareth-born Dubayah became involved in sound design and sound recording in 2001, and worked intitially on documentaries. His first fiction feature credit was as the boom operator on Elia Suleiman’s 2009 autobiographical drama The Time That Remains.

Palestinian directors praised Dubayah for his professionalism and his efforts to raise the standards of sound engineering in Palestinian cinema, both with his own work and as a mentor to aspiring youngsters.

“On a personal note, I lost a very dear friend. Professionally, we lost part of the heart and soul of Palestinian cinema,” said Jacir. “Raja was an important pillar in all my films, not only in the field of sound, but also as a musician and a producer. He left behind a great void that cannot be filled.”

Abu-Assad said he was also mourning Dubayah’s death. “Raja’s passing is a great loss, not only as a colleague, but as a father, friend and a beautiful person in spirit and form,” he said.

Aside from his sound work in cinema, Dubayah collaborated on a number of theatrical works as a music composer, including the Cheek Of The Dream (Ala Khad el Hilm), Space and Yes, I Will Betray My Nation (Na’am, Sa’akhoon Watani).

Dubayah died on June 4 and leaves behind his wife U’la Qudha Dubayah and two young daughters.