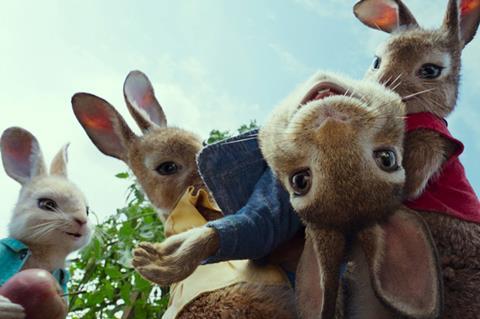 Boosted by Good Friday takings of £2.3m, the film was up 21% over the previous three-day weekend, adding £5.6m to take it to a running total of £21.6m. The Easter Monday brought in a further £2.6m, taking it to £24.3m after three weeks. Both Good Friday and Easter Monday are holidays in the UK.

After three weeks and a day on release, the film is tracking ahead of both Paddington (£14.6m) and Paddington 2 (£23.3m), though this rabbit may not have a long enough tail to challenge those films’ overall grosses (£37.9m and £42.8m respectively).

Steven Spielberg’s Ready Player One opened this weekend with a £4m three-day opening from 624 sites. Its gross is now £6.7m, which includes Easter Monday and previews from last week.

Spielberg’s highest-grossing UK film remains 1993’s Jurassic Park (£47.9m) and while Ready Player One has the blockbuster status, it’s unlikely to have the mass appeal to get close to that total.

Tomb Raider dropped to ninth in the chart in its third week, adding £569,00 for the three-day weekend. It now sits on £6.9m.

That’s Anderson’s best ever UK opening, topping 2009’s The Grand Budapest Hotel (£1.53m) and his previous stop-motion feature Fantastic Mr Fox (£1.5m) in 2009. The latter went on to gross £9.2m, comfortably his best performing title in the UK to date.

The Greatest Showman is officially out of the UK top five after thirteen consecutive weeks, falling to sixth in its fourteenth weekend with £809,504. The musical is up to £41.8m and has now surpassed the lifetime of Les Miserables (£40.8m).

Ahmed Khan’s Hindi-language thriller Baaghi 2, starring action star Tiger Shroff (who is set to star in an Indian remake of Rambo) opened into 216 sites over Easter. The film posted takings of £216,269 for a site average of £4,241.

Black Panther dropped to fourth in the chart this weekend, adding £1.1m. The film is now up to £47m.

US comedy Blockers, starring Leslie Mann and John Cena, posted a three-day weekend of £932,196, which added to previews and the bank holiday Monday for takings of £1.7m to date.

Paramount has the John Krasinski-directed thriller A Quiet Place out on Thursday (April 5), Lionsgate has UK horror Ghost Stories, 20th Century Fox has coming-out drama Love, Simon, Vertigo has the Death Wish remake, Studiocanal has Todd Haynes’ Wonderstruck, Universal has Cory Finley’s drama Thoroughbreds, Curzon has the Cannes hit BPM (Beats Per Minute) (120 Beats Per Minute), while Sky Cinema has the second film under its day-and-date distribution deal with Altitude, thriller The Hurricane Heist, out in the UK.