Qumra 2021: Musician Yasmine Hamdan says “you take a break from yourself” when composing for film 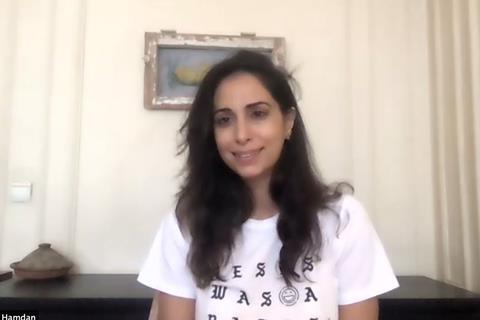 Lebanese singer-songwriter Yasmine Hamdan has been forging a path for contemporary Arabic music on the international stage for more than 20 years, leading the New York Times to describe her as “Arabic music’s modern voice”.

While her work may be contemporary it draws inspiration from the traditions and history of the Middle East as she explained in a talk on music and film at the Doha Film Institute’s Qumra event this week, moderated by compatriot filmmaker Rania Stephan.

Hamdan spent her early years in the Gulf countries of the UAE and Kuwait where her engineer father took jobs before the family returned to Lebanon in 1990, just as its 25-year civil war came to an end.

She discussed how her creative process is fuelled by this Gulf childhood, the songs her grandparents sang to her as a child and the experience of finding solace in music while feeling alienated as a young woman.

“My first memories were sand and silence,” she said.

She recalled how adrift she felt when she studied psychology at university in Lebanon in the 1990s, as the country emerged from its long and devastating civil war. “The space we were growing up in was half-destroyed. We had so many questions that no-one could answer.” Music, she said, “made me dream, it felt like a refuge.”

Recalling how, in pre-internet days, she relied on local music dealers for recommendations, Hamdan said it was her exploration of local and international sounds that gave her “a vocabulary” and the confidence to begin to express herself in her own voice.

In 1997, she created the band Soapkills with Zeid Hamdan (no relation).  Combining classical Arabic sounds with electro-pop, it became part of Beirut’s underground arts scene. Through albums like Bater and Cheftak, the pair explored their relationship with Lebanon and how the legacy of conflict had left its mark on Beirut even as the city began to reconnect with the wider world.

“War is something that is very heavy,” said Hamdan. “You saw it, you lived it, you felt the struggle, the pain the despair. But at the same time, you felt this incredible energy. It was like a new beginning.”

Hamdan explained that moving onto solo projects had not been easy as an “underground Arabic singer” wanting to have an international career. Nevertheless, she found people who shared her view that language is not a barrier to conveying emotion, including Madonna producer Mirwais, with whom she made the 2009 fusion album Arabology.

Another key collaborator is Palestinian filmmaker and DFI artistic diirector Elia Suleiman to whom she is married. She has provided music for his films including The Time That Remains and It Must Be Heaven. “There’s a quality complicity between the two of us,” is how Hamdan described their creative process. “He is so precise in the composition and choreography. He uses music like a punchline or almost like a character. It comes and tells you something.”

Hamdan has worked with filmmakers including Jim Jarmusch, who she met at the Marrakech International Film Festival. He was so impressed with her performance in an improvised concert that he asked her to write a song for the film he was writing, Only Lovers Left Alive, about vampires living in Morocco. She ended up writing and performing the song ’Hal’ in the film; something she described as an “amazing experience”.

Having since gone on to work with filmmakers such as Maysaloun Hamoud on In Between and Faouzi Bensaidi on What A Wonderful World, Hamdan suggested  her strong visual sense helps in these collaborations.

“When I’m on stage, I’m not just singing,” she said. “I have to have imagery in my head. I go from one space to another, one emotion to another. I see landscapes, I see colour.”

She is interested in doing more composing for film. “It’s really interesting because you start from a different point, you take a break from yourself,” she explained. “You give what you have but the background is completely different; you’re serving a project. It’s very enriching.”

Wherever she is composing or performing, one place that will always have a hold on Hamdan and her work is her home country of Lebanon.

She cited tracks like ‘Beirut’, from her third album Ya Nass, which translates as ‘Oh People’, and 2017 song ‘Balad’, which explored her sense of betrayal as a Lebanese citizen and featured a video by Suleiman, adding that while they allude to country’s troubled past they also express hope for the future.

“You never forget that you are from Lebanon because there’s always action, there’s always drama. There’s also joy, the place is so alive,” she said. “But at the same time, it’s very dysfunctional. So what do you do with your despair, your anger?”

“When you create, you have to play with that. Normalise your feelings, find a way to access them, transform them. And so something that, at the end of the line, will give you some joy, some happiness and serenity And also open a door for you. It’s like you’re in a room with all the doors and windows closed, and then you’re able to let it some light, to see some colour.”