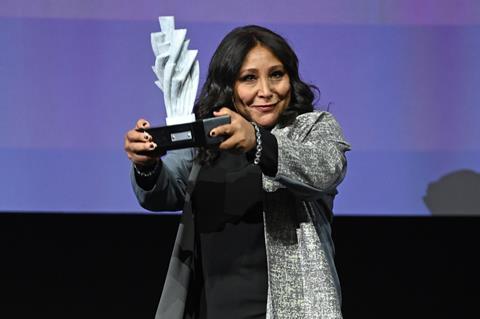 Saudi Arabia’s Red Sea International Film Festival (RSIFF) opened in Jeddah on Monday evening (December 6) with an array of international stars on the red carpet, but it was local filmmaker Haifaa Al Mansour who stole the show when she received an honorary career award at the opening ceremony.

Monday night’s ceremony unfolded against the backdrop of Jeddah’s historic centre, known as Al-Balad, with Joe Wright’s musical costume drama Cyrano as the opening film and a waterfront party afterwards with Haitian rapper Wyclef Jean as the headline act.

As the pioneering director of Saudi Arabia’s first film Wadjda in 2012, Al Mansour was regarded as a beacon of hope for local filmmakers prior to the lifting of the country’s 35-year cinema ban in 2017, and her subsequent international career is a source of inspiration for Saudi youngsters trying to break into filmmaking.

The director dedicated the award to all Saudi Arabian women, in a move that was met by cheers, whoops and applause, especially from the female spectators in the theatre.

“Cinema gave me my voice. I grew up in a period when women and arts in Saudi Arabia had no centre. Today, we are the centre. A new page has opened. I consider my honour as a woman as a tribute to all the girls in Saudi Arabia, and I tell them not to be afraid of competition. We are coming in strong,” she continued.

Al Mansour was among three women receiving an honorary award for their contribution to cinema at Monday’s night ceremony alongside French actress Catherine Deneuve and acclaimed Egyptian actress Laila Eloui. 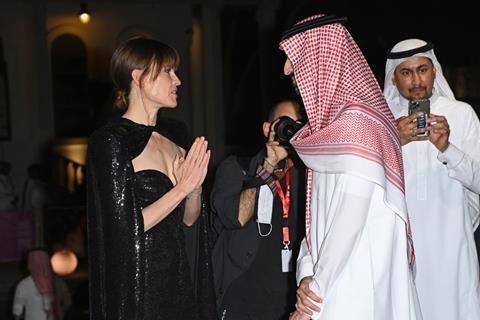 In a country where it is still the norm for women to dress modestly, Monday’s red carpet marked a new chapter.

The gowns were generally less revealing, however, than outfits seen at other Middle East festivals such as Cairo or El Gouna, with many female stars appearing to make an effort not to show off their upper arms and shoulders.

France has been out in force in Saudi Arabia over the past few days with French president Emmanuel Macron meeting Saudi Arabia’s de facto leader Crown Prince Mohammed bin Salman in Jeddah prior to the festival.

There were rumours the controversial prince might attend the Red Sea’s opening but he was not among the guests. The Saudi government was represented instead by Culture Minister Prince Badr bin Abdullah bin Farhan, who is regarded as a driving force in the country’s new culture drive, although he did not take to the stage.

RSIFF’s first edition will showcase 138 feature films and shorts from 67 countries, including 27 films by Saudi directors.

“Over the next 10 days, we will honour the very best of filmmaking from our region and beyond, and we could not have wished for a better way to begin than tonight. The festival is a watershed moment for our burgeoning Saudi film industry. The opening ceremony has set a high bar of what is to come in our festival’s future,” said RSIFF chairman Mohammed Al-Turki.