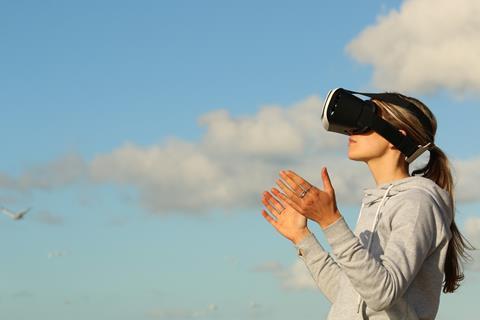 Sol Rogers, founder and CEO of immersive content studio Rewind and chairman of Bafta Immersive Entertainment, will give the opening keynote speech at this year’s Media Production Show (MPS) on June 12, discussing the topic ’The Future Immersive Landscape, AR / VR / MR and Beyond’.

Founded in 2011, Rewind is a VR production studio which has worked as a content developer for Oculus (Rift), Valve and HTC (Vive), Sony (PSVR) and Samsung (Gear VR).

The Bafta Immersive Entertainment Group explores the impact that virtual reality (VR), augmented reality (AR) and mixed reality (MR) will have on the current landscape of the film, games, and television industries, considering the impact of immersive entertainment in the context of Bafta’s global mission, and the best ways for Bafta to enable education about the technologies.

Ahead of his appearance at MPS, Rogers spoke to Screen about the issues in the virtual, augmented and mixed realities sector.

Your talk is called: “The Future Immersive Landscape, AR / VR / MR and Beyond” – what kind of topics will you be covering?

Whilst still in its infancy, immersive technology is progressing at lightning speed. The advancements in AR and MR open the door to an entirely new world of creative possibilities, while eye tracking and brain-computer interfaces are set to transform VR experiences. I will share the latest immersive tech developments and how, through these new mediums, experiences that bring people together to communicate, experience, and play in a truly memorable way can be created.

What are the big talking points in this sector at the moment?

There’s still a lot of talk about which immersive medium is going to be successful - will AR kill VR? - and which one is going to be left behind. I believe in the future of both of these mediums - they’re going to be able to coexist peacefully because they offer very different experiences and benefits; one isn’t going to cannibalise the other. It’s quite clear that there is huge appetite from diverse sectors for all manner of immersive tech and content.

There’s constant talk about investment and the size of the immersive industry. This recently launched report, commissioned by Immerse UK, means we finally have some figures to define the scale, nature, and economic value of the UK sector. Actual data about the here and now, rather than forecasts. And data that is specific to the UK rather than any other country. This first of its kind study maps the UK immersive sector and provides insights and intelligence that will help us all grow. It’s clear from the report that we all need to come together - government, educational institutions and the industry itself - to support this burgeoning sector and secure the UK’s position as a global leader in immersive technologies. You can read my breakdown of the report here.

What kind of impact does Immersive tech have (or will have) on the film and TV business?

VR and AR are stand-alone mediums that will add more choice and variety for consumers in the world of entertainment. Storytellers are no longer limited to the constraints of film and TV. Stories can come to life in a new, immersive way. The visceral experiences that immersive tech provides are an exciting development for the film and TV industries.

VR is truly transportive and allows the user to really feel like that are in another time, another place. Unlike traditional TV and film, where the composition is usually limited to a scene at a time orchestrated by the director and pulled together by editors, now a director’s vision can stretch much further. From a character whose reaction is triggered when you turn to look at them to music that directs your attention, and even haptics to further push the level of immersion. It’s therefore no wonder that this new medium is already been embraced by TV and film. For example REWIND has created VR experiences for HBO and Silicon Valley and the BBC and Strictly Come Dancing, amongst others.

360° video can take the most powerful elements of standard film and introduce a sense of presence to put the user in the middle of whatever situation they may be viewing. This could be a refugee camp in Syria, an Ebola hospital in Sierra Leone, or an old people’s home in England. This has been proven to be an effective way of getting people to empathise with situations they have no experience of being in themselves, and could add a whole new layer of humanity to news reporting, documentary and even feature film making.

Rather than transporting you to another place, AR and MR add to the real world. Favourite movie or TV characters can appear in your environment allowing IP holders to add a touch of magic to the everyday. Now accessible by most smartphone cameras, AR has made the move to the mainstream so we’re only going to see more and more broadcasters integrating AR into their plans. Augmented reality can enhance a studio environment and create compelling virtual set pieces to elevate production value, further engage viewers, and enhance storytelling in a very visual way. It’s already being successfully used for live-events, particularly sports and elections.

What’s the commercial challenges in this field at the moment?

Headsets are making their way into people’s homes, but it’s going to take a while before a HMD is as much a part of the furniture as a remote control. Great content will create demand for HMDs, driving growth, but whilst HMD distribution is limited, many companies are questioning reach and ROI, which limits the amount of content made. It’s a real chicken and egg situation.

Standalone headsets like the Oculus Go have a real chance of making VR an easier and more profitable place to be as a developer. The Go is quite simply the best mobile VR device on the market, at a price point that makes the medium far more accessible than it has ever been. I’m excited to see how this latest piece of tech will help solve the user base issue.

At the same time, it’s great to see many brands embracing immersive tech as we need these recognised companies with engaged audiences telling their stories and bringing their IP into VR, AR and MR to drive interest in the mediums. We also need killer apps. Pokemon Go did a great job for AR, we need something similar to really get the masses excited about VR.

Anything else you’d like to add before your talk?

Mixed Reality is still in its infancy, but it’s the future. The technology is one of the most exciting inventions since humans discovered fire! We’re thrilled to be shaping the future of mixed reality innovation as an approved HoloLens partner and looking forward to seeing how the Magic Leap offering further defines the category.

The Media Production Show (MPS) takes place on June 12 & 13 at the Olympia in Hammersmith, west London. It provides opportunities to meet and network with different exhibitors presenting products and services across pre-production, production, post and content distribution. Seminars are free to attend. The full programme is available at www.mediaproductionshow.com.