European sales agents were on a charm offensive during a panel hosted as part of this year’s International Film Festival Rotterdam Pro programme. 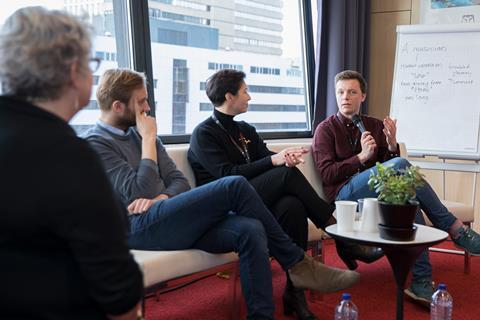 Moderator Kathleen McInnis, publicist at See-Through Films, opened the discussion by saying that “we all do this for passion”, referencing the challenging European arthouse market where content is at a surplus and exposure is at a premium.

Tassilo Hallbauer, sales and acquisitions executive at German powerhouse Beta Cinema, stressed that he was always on the lookout for projects he could get passionate about, and didn’t have a specific agenda in terms of genre.

“I really have to feel the story and feel connected to it. We [the sales agent and filmmakers] will be together for a couple of years with the project,” he added.

Marcin Łuczaj, acquisitions exec at New Europe Film Sales, added that his company likes to work as closely as possible with the filmmaking teams on their sales strategy, including how to package and market the project.

“You don’t want to sign the contract and then just see them as the festival. We want them to like the poster, the synopsis… we have to match,” he said.

Daniela Chlapíková from Pluto Film added that it was important to have buy-in from filmmakers on the strategy, but also important to manage expectations, “We agree with the filmmakers on what is the correct strategy [but] we look at what are their dreams are, and what might be the reality.”

Sending filmmakers to festivals to support films was crucial, the panel agreed, even if that meant sometimes have to waive screening fees so that talent can attend (some festivals operate this policy). “As long as a director wants to attend the festival we would never say no because we have to waive the screening fee. In the end it will pay off,” commented Hallbauer.

McInnis added that the chances of winning a festival audience award were “10-20% higher if a director travels”.

The panel unanimously agreed that the current trend of sales agents boarding projects at earlier and earlier stages (often at script stage) was beneficial for all involved. “I like being involved very early, we feel like part of the filmmaking,” said Hallbauer. “It can also help with funding.”

“It’s better for us to step into a project as early as possible,” added Chlapíková, who noted that it was crucial for sales companies to be able to input into festival screenings to help build buzz.

Łuczaj added that sales agents can also provide key advise about which festivals and which festival strands to aim for, “We know what is a good slot in a festival. We know the dynamics of the market – whether it’s better to premiere first or second weekend. A big festival can kill a film with a bad slot.”

Even if filmmakers rush to complete films after securing festival selection, it’s still worth working with a sales agent to help build buzz, said the panel. “We believe in a handshake and a gentleman’s agreement. We can always sign basic terms quickly so no one feels uncomfortable,” said Łuczaj. “Not a lot can be done if it’s really late, but if the film is amazing it will get buzz.”

Hallbauer noted that even when boarding a film late in the day, an announcement about the pick-up can quickly grab attention, “We could approach the trades and have the pick-up announced on the day of the premiere, that could help build buzz.”

Even if, ultimately, the film struggles to find distribution or glitzy festival slots, the relationship forged between filmmakers and sales agents could be valuable going forward. “You will stick with a film [and filmmaker] that you’re passionate about, I don’t see it as a relationship based on one film,” said Hallbauer.

“We do edgy and crazy films that we know won’t always do the numbers. But great reviews, huge festival runs… for us, if the filmmaker is happy, that’s a success,” added Łuczaj.

“Producers see sales agents as having a main interest in squeezing money out of the film, but we see it as working together. We work with a film because we love it,” concluded Hallbauer.