ScreenDaily Talks: ‘Emily In Paris’ producers to discuss pros and cons of shooting in France 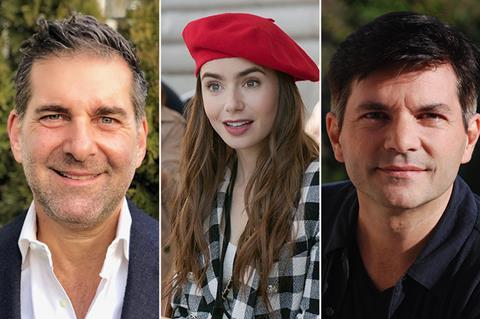 The latest in our ScreenDaily Talks live Q&A series will take place on Tuesday, January 26 at 4pm UK time (5pm CET, 11am EST, 8am PST) and will explore France as an international shooting destination, using Netflix’s hit show Emily In Paris as a case study.

Speakers are US film and TV producer Stephen Joel Brown and French producer and production manager Raphaël Benoliel, who both took producer credits on the series, created and executive produced by Sex And The City creator Darren Star. The moderator is Screen International’s senior Europe and Middle East correspondent Melanie Goodfellow.

Brown and Benoliel will discuss what factors convinced Star and his production team to shoot the series entirely in France, rather than only establishing shots with studio work elsewhere, as well as the choice of the Paris locations; what it’s like working with French crews and talent, and what support they got from local agencies.

Other topics on the table will include France’s Tax Rebate for International Productions, or the TRIP, and an exclusive update on the upcoming shoot for Emily in Paris 2, which is due to shoot in the French capital this year.

The 30-minute discussion will be followed by a 30-minute live Q&A in which the audience will be able to ask questions to the speakers; advance questions can also be sent to orlando.parfitt@screendaily.com. The webinar password will be emailed after registration.

The webinar will be available to watch on ScreenDaily after it has taken place.

Stephen Joel Brown
New York and Los Angeles-based film and TV producer Brown has 20 years of film production, management, operations and sales and marketing experience in Hollywood and internationally. Aside from Emily In Paris, previous credits include The Ottoman Lieutenant, Llama Cop, A Perfect Murder, The Devil’s Advocate and Seven.

Raphaël Benoliel
French producer and production manager Benoliel is one of France’s go-to figures for any international production shooting in France. His impressive CV features more than 50 international TV series and feature films. In addition to Emily In Paris, recent credits include The Marvelous Mrs. Maisel, Patriot, The Romanoffs and Mission Impossible – Fallout.

The episode of ScreenDaily Talks is organised as part of the 8th edition of locations trade show Paris Images, running January 25 to 29, 2021. This event is cosponsored by the CNC, Film France and Film Paris Region.