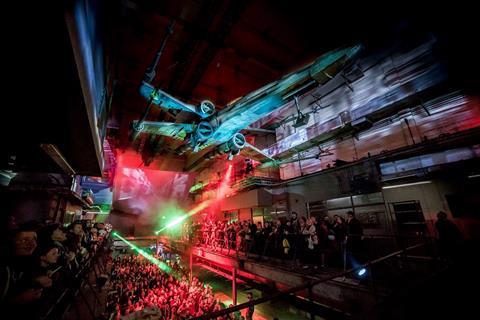 Secret Cinema – the wildly popular immersive cinema event company in the UK – is heading into new territories both geographically and in terms of ambition.

“The future of Secret Cinema is to grow it around the world,” founder and chief creative officer Fabien Riggall said during a keynote at Connext, the Flanders Image industry event in Ghent.

For the US expansion, he said, “Secret Cinema we’ll be starting in New York and LA and then there can be touring shows as well as static shows, like the Cirque du Soleil model.” First offerings could be Back To The Future in LA and Once Upon a Time In America in New York. Other European cities will be the next targets after the US.

Rather than investing in amazing (and expensive) environments and productions that have a limited run (historically, from a few days to four months), the company is also eyeing more “permanent” sites that can run indefinitely.

Riggall was a short filmmaker when he started Future Shorts in 2003, drawing in hip audiences to watch short films in unusual locations. Expanding on some of those ideas, in 2007, he launched Secret Cinema. The idea back then was to create an event screening in an unusual location, showing a great film – but audiences wouldn’t know what the film would be until they showed up on site.

They started small, with 400 people paying £5 each to see Paranoid Park in a gritty area beneath London Bridge. Now a Secret Cinema production can see 100,000 people paying up to £85 per ticket – recent hits include Back To The Future, Moulin Rouge, Dirty Dancing, Blade Runner and Romeo + Juliet. In the past 10 years, there have been 46 productions in total. Most of the screenings now are no longer secretive, but there still are some mysteries in the company’s Tell No One strand.

The runs regularly sell out – audiences are drawn to the opportunity to not simply watch a film, but to enjoy weeks of pre-event communication, to dress up in character and immerse themselves in a lavish recreated physical world (complete with actors) that evokes the film. The company is not just dress-up fun, it’s also big-business: Blade Runner ran for four months earning more than $6m and putting the 1982 film in the top 10 of the UK box office.

The biggest production for Secret Cinema has been Star Wars: The Empire Strikes Back, which saw around 100,000 people attend (and buy about £1m worth of costumes). It took a year to get the rights, but he says Lucasfilm’s Kathleen Kennedy was a great partner – “she believed in what we did and gave us the opportunity to do it…they had great trust in us.”

The production ran for four months and had 300 employees. It cost a whopping £7m to produce, Riggall revealed at his talk in Ghent.

Such high event costs means Secret Cinema isn’t sitting on huge profits, and it keeps its staff lean (about 25 people full time). “We’ve made money, but we’ve broken even. It’s been a real battle. It’s incredibly expensive to put on,” he said.

“It was always a battle to make it work,” but now that the model is established taking it global could lead to bigger profits. “We’ve created this formula and we’re in a good place.”

In addition to these juggernaut shows for older films, he also hopes more distributors see the potential of working with Secret Cinema pre-releases of new titles. “It’s taking the formula of Secret Cinema turning it into a release strategy for films,” he said.

For instance, they worked with Curzon Artificial Eye recently on a seven-day run of Park Chan-wook’s The Handmaiden, which earned 20% of the film’s overall box office. Fox Searchlight also trusted Secret Cinema with a 10-day preview of The Grand Budapest Hotel, which ended up garnering 10% of the film’s overall UK box office. “Fox Searchlight have been the most forward thinking studio in believing in us as a marketing vehicle for the movie,” Riggall added.

He doesn’t reveal too much about the details of the deals with each distributor. “Like any exhibitor you are paying a license to be able to exhibit it, but there is a marketing cost to us, we are reaching half a million people on our mailing list, and we’re big on social media. It’s always case by case with the studio or the distributor,” he said.

Riggall seems to have a constant stream of other ideas for the future – working with TV shows; Secret Cinema for Kids staging Charlie And The Chocolate Factory; bringing albums and musical experiences to life (one dream would be to have an immersive version of Prince’s Purple Rain); more screenings connected to activism and social causes (the company has previously done screenings in refugee camps) and more youth projects.

As if all that ambition isn’t enough, Riggall is also planning to return to his roots in making films, moving back into film production with a side project. “I’m also setting up a new company to make films and create films and think about what films can be in this world where everyone is playing Fortnite.”

Read more: Walter Iuzzolino - too much streaming funding is leading to “non-distinctive” shows