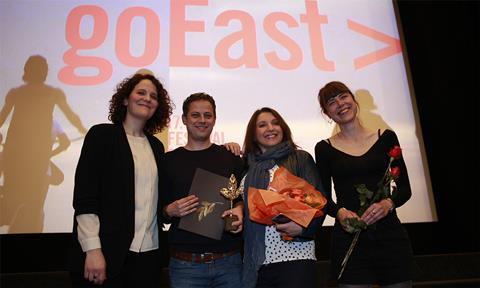 Bojan Vuletic’s second feature Requiem For Mrs J.  has become the first Serbian film in the history of the goEast - Festival of Central and Eastern European Film’s 17 years to win the top award, the €10,000 Golden Lily, for best film in Wiesbaden’s competition.

The co-production between Serbia’s SEE Film Pro, Bulgaria’s Geopoly Film, FYR Macedonia’s Skopje Film Studio, France’s Surprise Alley and Russia’s Non-Stop Production had had its world premiere at the Berlinale’s Panorama section in February and is in the sales line-up of Belgrade-based Soul Food Films.

Vuletic, who had attended his film’s screenings and last night’s awards ceremony with lead actress Mirjana Karanovic (both pictured, top, alongside filmmaker Hana Jusic and festival director Gaby Babic), is no stranger to goEast after his feature debut Practical Guide To Belgrade With Singing And Crying had its international premiere there in 2012.

The international jury headed by Latvian filmmaker Laila Pakalnina and with UK producer Sam Taylor, Estonian producer Max Tuula, German actor Jakob Diehl, and Bosnian director Igor Drljaca, presented the €7,500 the Silver Lily for Best Director to the co-directors Nana & Simon for their second feature, My Happy Family, which also received the FIPRESCI prize for best fiction feature to add to its growing list of awards.

Nana & Simon’s feature debut In Bloom won 30 awards, including goEast’s best film prize in 2013, while My Happy Family had opened the 17th edition of the Wiesbaden festival on 26 April.

Georgian cinema was also recognised when the €4,000 award of the Federal Foreign Office for Cultural Diversity went to Tbilisi-born Rati Oneli’s first full-length documentary City Of The Sun, which is being handled internationally by Canada’s Syndicado.

In addition, this year’s edition of goEast was the first where FIPRESCI decided to present a prize to one of the films screening in the documentary competition:  Croatian filmmaker Ivan Ramljak’s Islands Of Forgotten Cinemas about the neglected movie theatres on the Dalmatian Islands off Croatia’s coastline.

goEast continues its tradition of fostering links between the young generation of filmmakers from Central and Eastern Europe with their German opposite numbers through its East West Talent Lab with around 30 participants from countries as diverse as Russia, Moldova, Ukraine, Palestine, Serbia, and Romania.

In addition, this year’s edition saw the festival playing host to living legends of European (and world) cinema with a retrospective dedicated to the veteran Hungarian director Márta Mészáros, a special screening of Agnieszka Holland’s Berlinale winner Spoor, and a world premiere of a documentary on the life of producer Artur ‘Atze’ Brauner and his CCC Studios, Marina, Mabuse, Morituri.