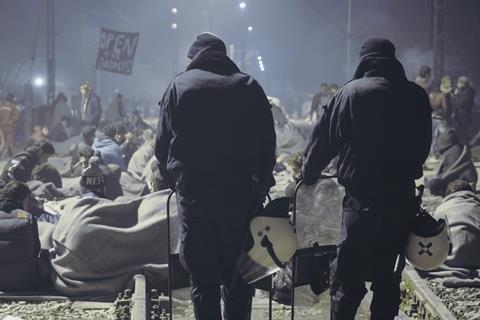 A Spotlight section of screenings followed by extended conversations is the major addition to the programme for this year’s Sheffield Doc/Fest (June 6-11), revealed today.

Chinese artist Ai Weiwei and German filmmaker Werner Herzog are among those attending the festival and participating in the section.

Ai Weiwei will present his film The Rest, about Europe’s refugee crisis and the disintegrating humanitarian aid system, which premiered at CPH:DOX in March.

Herzog will take part in a discussion with Patrick Holland, controller, BBC Two, following a screening of his film Nomad: In The Footsteps Of Bruce Chatwin, which launched at Tribeca Film Festival last month.

Further titles taking part in the strand include Waad al-Kateab and Edward Watts’ UK production For Sama, which will come to Doc/Fest following its Special Screening in Cannes next Thursday (May 15).

The directors will participate in a discussion following the film, hosted by TV presenter Jon Snow.

The full Doc/Fest programme for this year’s festival – the 26th edition - includes more than 180 films, and 28 alternate realities projects from over 50 countries worldwide. There are 33 world, 11 international, 10 European and 92 UK premieres.

The festival will host six competitive feature sections, plus one competitive shorts section.

Five titles will compete for the Grand Jury award, including For Sama and Seamus Murphy’s A Dog Called Money about British musician PJ Harvey’s creative process. Artist Jeremy Deller, producer Charlotte Cook and filmmaker Jenn Nkiru will select the winner for this section.

Among the six films competing for the International award are the world premiere of Kristof Bilsen’s MOTHER, about a lady taking care of Europeans with Alzheimer’s in Thailand while being separated from her own children. Director-producer Inadelso Cossa, documentarian Samara Chadwick and director of Kosovo’s DokuFest Nita Deda are on the jury for this award.

The country focus for the 2019 event is on Japan, and features UK premieres from Makino Takashi (Memento Stella), Kazuhiro Soda (The Big House) and Yuki Kawamura (Norie).

Asif Kapadia’s Diego Maradona was previously announced as the opening film, with Kapadia giving a Bafta Masterclass the day after the screening to discuss his own career and inspirations. Other previously announced sessions include a discussion with filmmaker Paul Greengrass about his journey from TV documentaries to Hollywood features, and his thoughts on diversifying the class representation in the film industry.

This year’s industry section includes more than 40 talks. Amongst them are ‘Cinema and State: developing policy frameworks for feature docs’, with panellists including Lisa-Marie Russo, head of the BFI’s Doc Society Fund, and producer Elhum Shakerifar of Hakawati Films.

Michael Apted, co-creator and director of the long-running Up TV series, will appear via a filmed interview in ‘Up: a Longitudinal Case Study’, looking at the observational documentary that has followed 14 subjects through their lives since 1964.

Doc Society will also attend the festival to offer 1-2-1 advice for filmmakers, including presentations and advice about funding.