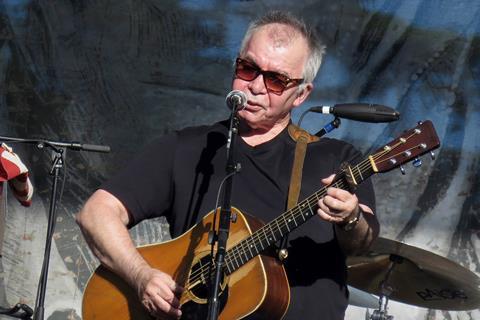 Sony Pictures Classics has picked up worldwide rights to the documentary about singer/songwriter John Prine documentary tentatively titled John Prine: Hello In There.

Zachary Fuhrer directs the feature, which is in post-production and tells the story of the mysterious performer who broke out with an album he wrote while a Chicago postman, and went on to create an occasionally surreal body of work that included Angel From Montgomery.

Production began as Prine prepared to release his first album in 13 years, and followed him throug a resurgence that took him from Radio City Music Hall to the Songwriters Hall of Fame.

Shot with the complete support of the Prine family, the filmmakers conducted extensive interviews with Prine’s friends and peers, including young songwriters whose careers he helped shape, such as Sturgill Simpson, Jason Isbell, and Margo Price.

Fuhrer co-wrote the film with Patrick Doyle, who also produced. RadicalMedia is a production partner on the film. SPC, which championed another cult performer in the 2012 documentary Searching For Suger Man, plans a theatrical release.

“Zachary Fuhrer and Patrick Doyle are beautifully capturing the story of one of the world’s most original musicians,” said Sony Pictures Classics. “We are thrilled to give fans the opportunity to discover John Prine more intimately through this remarkable film.”

Doyle added, “Spending time with John Prine over the last year, we’ve learned that he is just as insightful – and hilarious – in everyday life as he is in his songs. From playing at pubs in western Ireland to the Ryman Auditorium, there is nobody better at spellbinding a room. For the last 50 years, he’s been a voice for the overworked, underpaid and forgotten, and our current political times have made his songs even more relevant.

“He is a Johnny Cash-level talent we are lucky to still have performing, and he was kind enough to let us in on his life: making breakfast at home in Nashville, preparing for the biggest show of his life at Radio City and more. Zach and I couldn’t be happier to work with Tom Bernard, Michael Barker and the Sony Pictures Classics team on what we want to be the definitive portrait of an American songwriting legend.”

Fuhrer said, “Patrick and I can’t think of a better partner than Sony Pictures Classics for our film. As John’s band members like to say, ‘There are two types of people: those who love John Prine and those who haven’t heard of him yet.’ John’s philosophy on life – finding comedy in tragedy – is the heart of the film; his stories a daily reminder that there’s always a way to laugh at your own misfortune. None of this would be possible without the endless support of John, Fiona, Jody and the Prine family, a crew of dear friends, Peter Shapiro, and the team at Radical.”