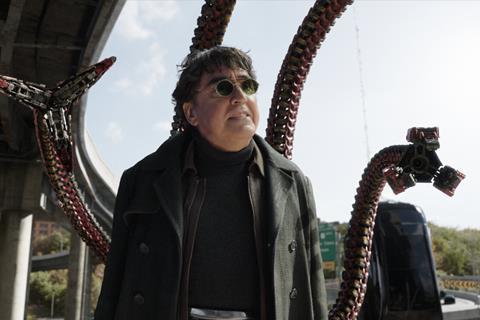 Spider-Man finished well ahead of Warner Bros’ opener The Matrix: Resurrections, which launched with a £905,158 three-day weekend, boosted by £1.7m from previews after opening on Wednesday (December 22), for a £2.6m total. Directed by Lana Wachowski and starring Keanu Reeves and Carrie-Anne Moss, the film recorded a screen average of £4,516.

With most UK and Ireland cinemas closed on Christmas Day (Saturday), the vast majority of box office takings were recorded on Friday and Sunday.

Well behind in third place was eOne’s Clifford The Big Red Dog, which added £349,836 on its third week for a £3.8m total

Rounding out the top five was the debut of Hindi-language sports drama 83, directed by Kabir Khan and distributed by Reliance, which opened with £137,899, rising to £182,518 including previews.