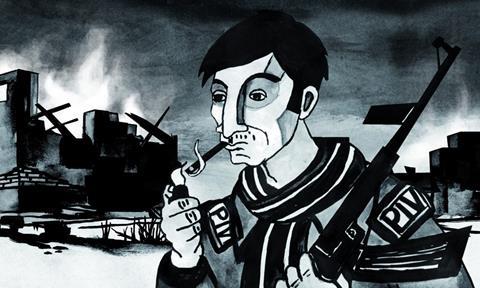 Swiss production company Dschoint Ventschr Filmproduktion faces a shortfall of €150,000 to complete Anja Kofmel’s animated documentary Chris The Swiss after the Croatian Audiovisual Centre (HAVC) continues to refuse to pay out €150,000 funding due as part of its cash rebate system.

Kofmel’s investigative feature retraces the steps of her cousin, journalist Christian Würtenberg, who was killed in Croatia in 1992 wearing the uniform of an international mercenary force, the First Platoon of International Volunteers.

Speaking to Screen at this week’s Locarno Film Festival, the film’s producer Samir said that he believes that HAVC’s actions come following the formation of a conservative government under Prime Minister Andrej Pienkovic in Croatia and are “unprecedented” in the European audiovisual landscape.

The bone of contention for HAVC  appears to be the film’s portrayal of the conflict in ex-Yugoslavia.

The €2m co-production between Dschoint Ventschr, Germany’s ma.ja.de and Nukleus Film had been awarded selective production support by HAVC in 2014. In addition, further backing of €150,000 was due to be paid out as a cash rebate since the project had spent over €1m on production of the animated sequences at an animation studio in Zagreb employing 30 local animators for more than a year.

Since HAVC delayed release of the funding, a meeting was organised during this year’s Cannes Film Festival to try to resolve the impasse.

Attending the sit-down were HAVC director Daniel Rafaelic and Margarita Peric, responsible for the cash rebate scheme at the fund, and Ivo Kummer and Laurent Steiert of Switzerland’s Federal Office of Culture, Catherine-Ann Berger of Swiss Films, and Roberto Olla, executive director of Eurimages, which also supported the project.

However, the parties were unable to agree a suitable outcome.

HAVC’s legal representative Josipa Dasovic subsequently wrote to Dschoint Ventschr saying “it came to our attention that the script for the project was changed in a way that final approval of the film in the selective aid part was questionable (…) HAVC offered a hand in form of a historical expertise advisor to assist you in this project, and this offer still stands.”

In a written response, Samir, who is also the director-producer of 2015 Berlin Panorama title Iraqi Odyssey, claimed that there had not been “any significant changes” to the script from the version sent with the application for the cash rebate in 2014.

“Since you failed to indicate what exactly in your eyes changed so dramatically, it is difficult for me to judge whether that is true or not,” he observed.

“Also bear in mind that we as well as you live in a democratic, liberal state and the director is entitled to have her own interpretation of certain statements, events in the film, especially in the animation parts,” he continued. “This freedom is a vital fact in today’s documentary [film]making.”

“We of course understand that the selective contribution cannot be regarded as an automatic aid,” Samir conceded in his letter, “but, to our knowledge, that goes also vice versa - meaning [that] the rules applicable to the selective aid are not to be applied to the automatic aid and have therefore to be treated differently.”

¨The €150,000 outstanding from the cash rebate is exactly the amount we now need to complete the film’s postproduction,” Samir explained this week, pointing out that several festivals are interested in showing the film.

HAVC was unavailable for comment when contacted by Screen.

The current stalemate follows in the wake of another controversy involving HAVC and Chris The Swiss’ Zagreb-based co-producer Nukleus Film.

Hribar resigned from his post as head of the Audiovisual Centre at the beginning of this year in the face of political pressure and concerns about increasing interference in the film sector by Croatia’s Ministry of Culture.

HAVC’s production incentive was launched in 2012 and is available to international and local filmmakers in the form of a rebate of 20% on qualifying Croatian spend for feature films, documentaries, TV drama and animation.