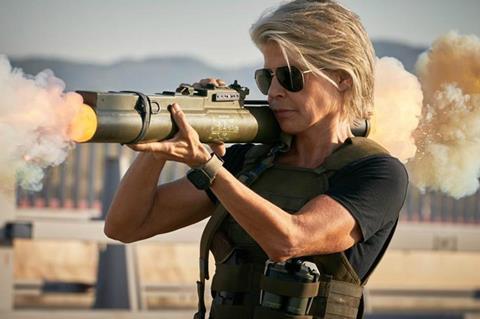 NOVEMBER 11 UPDATE: Terminator: Dark Fate was the top Hollywood release at the weekend as an estimated $29.9m propelled it past the $150m international box office mark and $40.7m drove the global tally to the cusp of $200m, while Joker continued its march towards the $1bn global mark.

Maleficent: Mistress Of Evil has reached $430m worldwide to rank as the third Disney live-action film and the sixth Walt Disney Studios film to cross $400m this year, and ranks among the top 15 films of the year globally. The Angelina Jolie fantasy adventure sequel brought in $19.9m internationally from 57 material territories to stand at $333m. Europe has generated $145m, Asia-Pacific $126m, and Latin America $62m.

UPDATED: Roland Emmerich’s Midway earned an estimated $23.2m through AGC Studios licensees led by a $15.7m debut through Bona in China for the independently financed wartime action drama. France delivered $1m through Metropolitan, the UK $965,188 through Lionsgate, and the Middle East $906,738 through Salim Ramia. Combined with the $17.1m number one North America debut through Lionsgate, the film has raced to $40.3m after its first weekend.

Chinese hit Better Days crossed $200m worldwide after $21.1m sessions boosted the running total to $202.3m. Derek Tsang directed and Goodfellas Pictures and Fat Kids Production produced the story of a bullied school girl and her relationship with a tough street kid, with whom she is implicated in the murder of a teenage girl.

UPDATED: Joker continued its march towards the $1bn global box office mark, earning $21.4m from 79 international markets to land at a muscular $673m, and $986.5m worldwide.

Drama The Good Liar starring Ian McKellen and Helen Mirren launched in the UK on $1.2m and goes out in Russia this week.

A $4.1m session for Abominable from DreamWorks Animation and Pearl Studio elevated the international running total to $92.9m, as worldwide box office reached $167.3m. The family title has delivered $10.6m in France after three weekends, $9.3m in the UK after five, and $5.2m in Spain after five. Emilia Clarke rom-com Last Christmas opened in 10 markets for $3.1m, with the bulk coming from a $1.5m number one debit in Australia.

Columbia Pictures’ R-rated comedy-horror Zombieland: Double Tap grossed $5.1m from 49 markets to push the international tally to $35.3m and surpass the lifetime total of Zombieland. It opened in Germany on $1.4m including previews.

Hustlers opened in two markets, earning $1.8m at number one in Italy, and $735,000 at number four in Spain. The estimated international weekend total amounted to $3.5m for a $40.3m running total.