Tom Tykwer: 'Babylon Berlin' could run for another decade

The series set in 1920s Berlin is being hailed as game-changer for German film and TV. 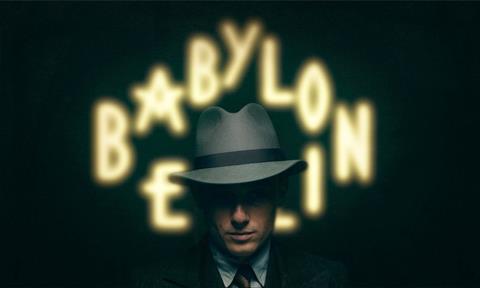 German directors and writers Tom Tykwer, Achim von Borries and Henk Handloegten premiered a dazzling 15-minutes of their ambitious high-end series Babylon Berlin at the MIPDrama Screenings on Sunday where it won the grand jury prize.

Based on the detective novels of German writer Volker Kutscher, revolving around idiosyncratic police detective Gereon Rath, the series unfolds against the backdrop of Berlin during the Golden Twenties.

The city was then at its cultural height, a hotbed of decadence and also a safe haven for hundreds of thousands of Jewish immigrants seeking refuge from persecution in Russia and Eastern Europe.

Budgeted at $39m (€37m) for seasons one and two, consisting of 16 episodes, and produced by Tykwer’s X Filme Creative Pool, ARD Degreto, Sky and Beta Film, which is also distributing worldwide, the series is being hailed as potential game-changer for German film and TV.

The trio unveiled an extravagant cabaret club scene, on Sunday from the second episode of season one, as well as a montage of other scenes giving a sneak-peak at the wider story arc.

They are currently racing to complete the edit of the first two seasons ahead of its launch on Sky in Germany in October.

“This is the first-time we’ve seen daylight in months, or sort of daylight,” joked Tykwer looking out at the rain-sodden terrace of the Majestic Hotel in Cannes on Sunday ahead of the screening. “We’re up to about episode 12. We’re not finished at all, just our nerves.”

In the backdrop, the writer-directors are already mulling subsequent seasons and would like to adapt the whole collection, which currently numbers eight novels.

“The structure of the collection, is one year, one novel, starting in 1929, and going up to 1936. Seasons one and two cover the first novel with eight episodes each,” explained Handloegten.

Asked if they wanted to adapt the whole collection, Tykwer replied: “Yes, that the plan. We want to get old together. We’ll be here for a decade at least.”

He said the project had grown out of long-held desire to explore Germany during its post-World War One, Weimar Republic period, running up until 1933.

“I’d been looking for something set in that period – it’s an un-filmed period in comparison to what came afterwards. One of the only films of reference from that time for many people is Cabaret,” he said.

“I’m fascinated by these years, which are so different from what came before and after. It was such a modern period, marked by freedom and radicalism, but I needed a structure.”

“When I ran into the novels I was hooked pretty much immediately. They have an open structure. They’re juicy and powerful and full of detail but still invite you to explore and expand. I knew from the start it would have to be a TV series and that it wouldn’t work as a feature. I also knew I couldn’t do it alone.”

He brought long-time friends and collaborators von Borries and Handloegten onto the project, partly because they had made one of the few films set in the 1920s, Love in Thoughts – about a group of decadent youngsters who go-on a weekend sex and drugs binge which ends in tragedy.

The trio has now been working on the series for four years.

“We were writing together day by day for two-and-a-half years, re-focusing the whole story into a bigger art,” said von Borries.

Although the series unfolds three years before Adolf Hitler rises to power and he is only mentioned once in the first two seasons, and then by way of a joke, von Borries says Germany’s future fate was ever-present in their minds during the writing process.

“One of the questions that kept coming up was how can these free-minded, open people, people we like, turn into fascist monsters,” he said.

Handloegten said parallels with what is happening today in the era of Trump, Brexit and rising populism across Europe only started to surface as the writing and shooting got underway.

“The crazy thing is the more we worked on the series, the more it started to mirror the reality in our own world,” he said. “We didn’t foresee this at all.”

Having worked closely on the writing process, the three directors went their separate ways on set, taking charge of different locations during the shoot, which took place across the city, although most the structures in existence in the 1920s were destroyed in the war, and a huge new set purpose built for the series at the Babelsberg Studios.

All three admitted researching the city’s past glory had been painful. “It was devastating, absolutely devastating, when you think what it was and might have been if it had not been destroyed — not just architecturally but also in terms of its spirit” said Handloegten.

They are now editing in their sections, sometimes separately, sometimes together.

Tykwer said his experiences making the 2012 sci-fl drama Cloud Atlas with Lana and Lilly Wachowski had prepared him for this collaborative writing and directorial approach.

Asked if thought he would ever make a feature film again now that he is so immersed in the series, Tykwer replied.

“I’ve considered myself a film-maker ever since I started, whatever format I am working in. How my work is shown is secondary for me. What we’ve done here is make a 12-hour movie. Everything about the way it was made was like a movie – it was just that the process was longer.

“I’d say that my previous films were watched 90% of the time on the small screen. This is my reality, it’s always been my reality and that’s fine with me.”