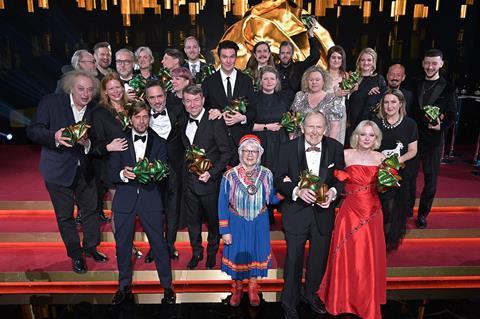 Sofie Krunegård won the best costume design prize and Stefanie Gredig won the best makeup award for their work on the film.

Triangle Of Sadness won the Palme d’Or at last year’s Cannes and is expected to pick up Oscar nominations, after securing three Bafta nods last week.

The Guldbagge (Golden Beetle) award for best actress went to Sigrid Johnson for her performance in Sanna Lenken’s Comedy Queen while best actor was won by Granit Rushiti for his debut role as the teenage version of Swedish soccer star Zlatan Ibrahimović in Jens Sjögren’s biopic I Am Zlatan.

Best screenplay went to Tarik Saleh for Cairo Conspiracy (released as Boy From Heaven in Sweden), which is Sweden’s entry for the best international feature Oscar and made the shortlist.

Best Actor In A Leading Role – Granit Rushiti, I Am Zlatan

Best Sound Design – Ted Krotkiewski, All Of Our Heartbeats Are Connected Through Exploding Stars

Gullspira (for extraordinary contributions in films for children) - Sanna Lenken, director and screenwriter