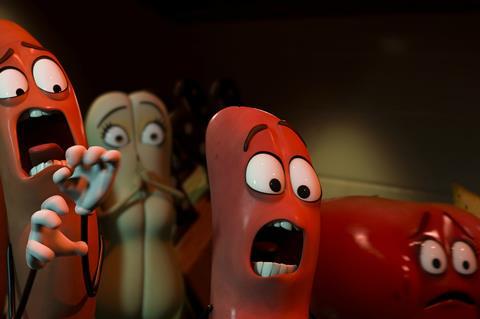 ‘Sausage Party’ would be classified as 18 under new BBFC guidelines.

The British Board of Film Classification (BBFC) has published new classification guidelines, with changes including stricter rules on scenes of ‘sexual threat and sexual violence’. Any film showing sexual violence will now receive a minimum rating of 15, rather than 12 or 12A in the UK.

Films with the strongest sex references, in particular those using ‘the language of pornography’, will receive an 18 rating. The new rules will come into effect on February 28, 2019.

UK releases that would have received different ratings under the new guidlines  include The Duchess and The Kite Runner, which would now be rated 15 or cut to their current 12A rating; and Sausage Party, Wind River and Red Sparrow which would move from a 15 to a 18.

The new guidelines have been produced after a public consultation involving more than 10,000 people, which showed young people and parents want to see an increase in classification guidance, particularly around online content.

According to the BBFC, the consultation found viewers felt a heightened sense of anxiety when watching ‘real world’ scenarios which could happen to them. These include depictions of terrorism, suicide, self-harm and discriminatory behaviour. The response suggested current BBFC category standards are appropriate on these matters.

This is the fifth time the BBFC has consulted on its age classification guidelines; the previous time was in 2013/14.

The BBFC has also called for greater consistency for age ratings across different platforms, and wants its ratings to appear on streaming services.

A panel event called ‘Listening To Public Opinion: BBFC Age Ratings in the Digital Era’ took place in London today.  It discussed how children, teens, young people and families view films and other media, what challenges there are and what issues concern parents and teenagers when choosing what to watch on and offline.

Panellists included Josh Korn, US-based manager of global public policy for Netflix. “In the UK we submit our original content for BBFC rating,” Korn explained. ”They rate it and we put that up on the service. Any content that has been previously rated, we will also put up. Our goal is to increase our partnership to hopefully get to 100% BBFC ratings.”

He explained Netflix has its own in-house classification team that works globally.  “We have a classification team that is made up of child development psychologists, movie experts, and engineers,” he said. “We try and use technology to help create global ratings that are locally sensitive. We look for the common elements in each title - violence, sex, nudity, themes of suicide, themes of sexual violence. There are hundreds, maybe thousands of individual tags that we will put on a title with varying degrees of intensity, and we’ll use that in algorithmic function to get to a classification.”

The BBFC confirmed Netflix is now its biggest client. It has provided certification for more Netflix content that for any other company since the creation of the BBFC in 1912.