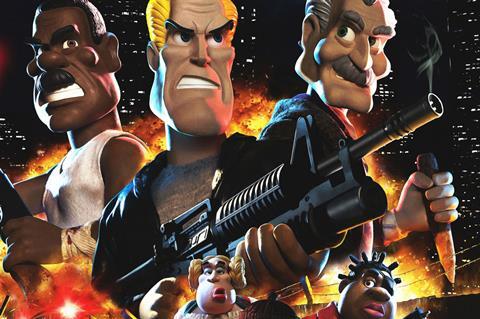 ’Chuck Steel: Night Of The Trampires

Animortal Studio, the Wales-based stop-motion animation production and VFX outfit launched in 2014, has completed its debut feature Chuck Steel: Night Of The Trampires.

The film is a 1980s-inspired, action-horror-comedy filmed entirely in stop-motion. It has secured a world premiere at the Annecy International Animated Film Festival next month.

Written and directed by Mike Mort, who also voiced many of the characters, Chuck Steel: Night Of The Trampires was shot using digital stills cameras and was produced using a crew of 150 people, with 27 separate units either shooting or prepping simultaneously in the company’s studio, a 23,000 square-foot industrial estate in Bridgend, South Wales.

Set in 1986, the story follows Chuck Steel, a renegade lone wolf cop who doesn’t play by the rules. He finds his work cut out for him when the governor of LA decides to reduce the licensing hours for clubs and bars, triggering a sudden, inexplicable spate of high profile assaults in the city.

Animortal was founded by Rupert Lywood, entrepreneur and chairman of Animatrix Capital, whose film credits as an executive producer include the Oscar-winning Tsotsi and The Railway Children. His co-founders were investor Randhir Singh Heer and director Mike Mort.

The company’s work also includes building some of the sets for Wes Anderson’s Isle Of Dogs. The studio plans to debut a slate of projects at the market of the 2018 Annecy festival in France.

Mike Mort commented: “After many years of trying to get the Chuck Steel project off the ground, I am very proud of what we, as a studio, have achieved on this production. Moving forward, we aim to make stand out, original projects that will surprise and entertain cinemagoers worldwide.”

Randhir Singh Heer and Rupert Lywood added: “We’re extremely happy with the state of the art studio facility we’ve built, and we look forward to developing and producing many more high -end stop motion films in the future, making full use of the extensive animation talent pool that the UK has to offer.”