Philippines-set crime thriller, made by British filmmaker Sean Ellis, submitted by the UK for the Academy Award for Best Foreign Language Film. 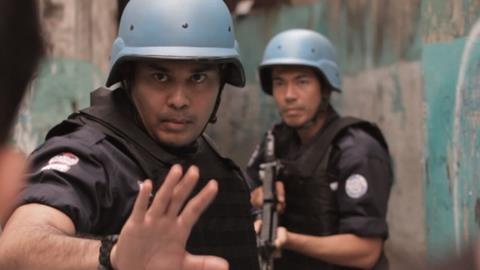 Metro Manila, by British filmmaker Sean Ellis, has been selected as the UK’s official submission in the Best Foreign Language Film Award category for the Oscars 2014.

A selection committee from BAFTA chose the crime thriller, shot in the Philippine capital in the Tagalog language with a local cast and crew.

The crime drama follows Oscar Ramirez and his family, who escape their impoverished life in the rice fields north of the Philippines for the capital city of Metro Manila. Oscar lands a job for an armored truck company and is taken under the wing of senior officer Ong. But he is soon exposed to the reality of the job’s mortality rate and the shady motives of his new partner.

Metro Manila won the audience award for world cinema at this year’s Sundance Film Festival and is set for release in the UK on Sept 20 by Independent Distribution.

The UK has submitted films for consideration for the foreign language category just 10 times previously and only two were put forward into the main race – Welsh biopic Hedd Wyn in 1993 and Welsh romantic drama Solomon and Gaenor, starring Ioan Gruffudd (Fantastic Four), in 1999.

Metro Manila would not have been able to be submitted by the UK under old rules. In 2002, BAFTA originally selected Asif Kapadia’s Hindi-language feature The Warrior as its Oscar submission but the film was disqualified by AMPAS because the film did not take place in, nor was it filmed in a language indigenous to, the UK. The rule was changed in 2005.

Coincidentally, the Film Academy of the Phillippines yesterday revealed it would submit Hannah Espia’s Transit for inclusion in the foreign language category. The tackles the life of Filipino migrant workers in Tel Aviv who are facing the threat of a law deporting the children of migrant workers.

Fox International Productions (FIP) has acquired remake rights and is eying foreign-language remakes of Metro Manila as well as developing a version for English-speaking audiences.

Speaking to BBC Radio 4’s Film Programme this week, Ellis said the film was inspired by a heated argument he saw between two armoured truck drivers that he witnessed while on holiday in the Philippines in 2007.

“I think it’s a universal story. Fox saw that and said ‘We can transpose this story to India or South America or to Detroit or wherever’,” said Ellis.

“I have first refusal to direct any of them if I liked. But I kind of feel I’ve done that story, unless I feel there’s something I can add. So now I’m looking for the next thing that can motivate me.”