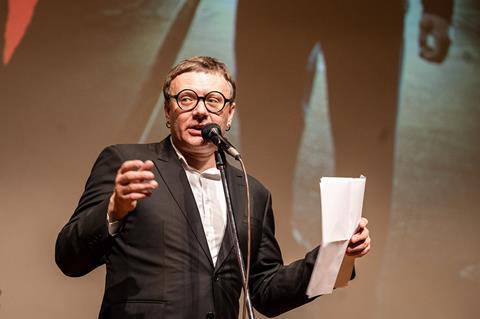 Ukrainian producer Denis Ivanov, whose credits include Oleg Sentsov’s Rhino and Sergei Loznitsa’s Donbass, has released an open letter calling on professionals working in the film and cultural sectors to wake up to the “genocide of Ukrainians” as Russia invades his country.

Ivanov is currently signed up as a volunteer for the local territorial army near where he lives outside Kyiv, close to the route through which Russia’s 40-kilometre convoy will pass if it proceeds to the Ukrainian capital.

He said that the time had come for a blanket ban of all Russian films from international events on the basis that all will have received some sort of state support regardless of the director’s political beliefs.

Some of these films, he added, will also receive the support of funds owned by oligarchs. He cited the example of Kinoprime, which belongs to Roman Abramovich, who is currently trying to push through the sale of Chelsea football club before potential UK sanctions hit.

“Most of the Russian “opposition” directors can work only because they were allowed to work by Putin’s regime. They have their roles in the play, written and directed in the Kremlin. Presentation of their work at film festivals has the only aim – to falsely show that Russia is part of the so-called civilised world,” wrote Ivanov. “The best Russian filmmakers can do now is to refuse to represent their country in international events and make a statement about it.”

Most A-list festivals – including Cannes and Venice – have issued statements that they will bar the participation of official organisations like Roskino but that Russian filmmakers not aligned with the Putin regime would still be welcome at their upcoming 2022 editions.

Ivanov’s letter comes as the Russian invasion of Ukraine enters its second week.

Ukraine’s State Emergency Service said on Wednesday (March 2) that at least 2,000 Ukrainian civilians have been killed since the start of the invasion on February 24. Another one million people have fled the country and Europe is gearing up for the worst refugee crisis since the Second World War.

The Boycott of Russian Cinema and Culture

I think some festival selectors, film professionals and cultural managers just do not get what is happening in Ukraine. This war of aggression by the Russians has turned into a war on independence and a war for values and rights. It is, first of all, the genocide of Ukrainians. And you can follow it almost live online via news outlets and social media.

Up until yesterday, missile attacks took place in civilian buildings, kindergartens, hospitals, and schools. Around 600 thousand Ukrainians already flew to Europe, more than 2000 Ukrainian civilians were reported dead and dozens of children are among them.

These are war crimes.

In these circumstances, I sincerely wonder about the position, that I endlessly read about in the press and online that:  “culture is out of politics”, “we have to hear opposition voices”, “boycott will put limits to artistic expression”.

Russian cinema is funded by the Russian State and most of the films are supported by the Russian Ministry of culture or state-backed Cinema Fund. That means that at the beginning of each film there will be their logos. Logos of the State, responsible for the genocide of Ukrainians.

Films that are made out of the state financing system are financed by funds of oligarchs, like Roman Abramovich’s fund KINOPRIME. These oligarchs became rich because they were and mainly are close to power. They helped Mr. Putin to get his influence and agreed with the actions of his regime. They are using their funds for cinema support to clean their reputation in the West.

Most of the Russian “opposition” directors can work only because they were allowed to work by Putin’s regime. They have their roles in the play, written and directed in Kremlin. Presentation of their work at film festivals has the only aim - to falsely show that Russia is part of the so-called civilized world. Inside Russia, each participation of a film in the film festival would be a sign that  “business as usual” is possible, even in the times of mass murder of Ukrainian civilians.

The best Russian filmmakers can do now is to refuse to represent their country in international events and make a statement about it. This act of solidarity would be the most clear and eloquent anti-war message to the world and Ukrainians than their statements in social media that they are “against war”. It’s not the right time for red carpets for our dear Russian colleagues.

Ukrainian film professionals have now gone to the army, or are helping as volunteers, or taking cover from Russian missiles in shelters, or evacuating their families from the war zone.

Their “artistic expression” is limited by these circumstances. On behalf of them, I’m asking for support of our boycott of Russian cinema at all international film events and all international organizations until Russian government will end up in Hague.

No more “business as usual” with Putin’s Russia.