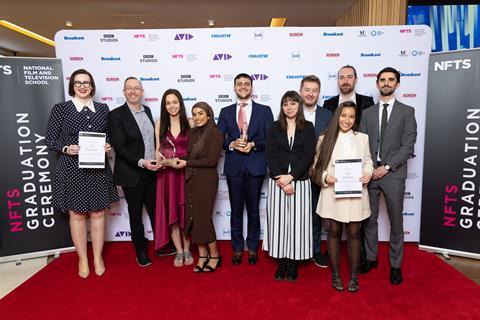 The UK’s National Film and Television School (NFTS) has awarded prizes to its students at the 2022 Graduation Showcase, plus an honorary fellowship to BBC chief content officer Charlotte Moore.

The Showcase consisted of four days of screenings and industry meet-and-greets at the BFI Southbank in London, leading up to the graduation ceremony at the Odeon Luxe cinema in Leicester Square today (March 4).

Cinematography MA student Jack Edwards won the best cinematographer award, with a prize of a seven-day lighting hire package, for his work on fiction film Whiteboy. The jury noted “the cinematographer’s composition strongly supported the narrative; for example, only three shots into the start of the film the story unfolds and the audience is invested.”

This year saw the inaugural award for excellence in composing, given to Composing MA graduate Sam Rapley. “Sam demonstrated fantastic musical proficiency and timing, a joy to listen to!” noted the jury.

Moore was awarded the NFTS’ Honorary Fellowship “for her unrivalled contribution to the screen industry.”