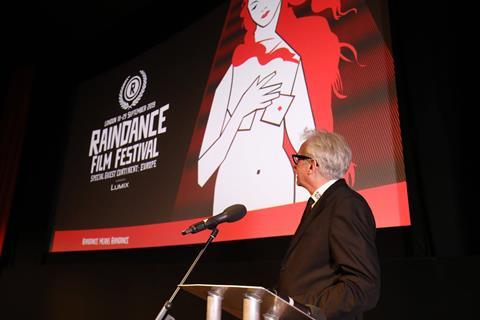 The UK’s Raindance Film Festival has switched to an online event for its 2020 edition, running from October 28 to November 7.

The festival will consist of screenings and panels, including live industry sessions from central London venues which will be streamed to festival viewers.

Its online content is operating via the Shift72 platform, which has previously worked with the Cannes virtual Marché, CPH:DOX, and Visions du Réel.

Raindance Immersive, the festival’s VR strand, will operate via Viveport and include virtual gatherings.

The premiere status of films will continue as previously; all films in the selection will have a UK geo-block, making them only available to viewers in that territory. Other elements such as panels will remain available worldwide.

The event will also include a retrospective on the yet-to-be-announced Raindance Icon honorary award recipient.

In March, festival founder Elliot Grove announced it would move from its usual September slot to late October.

Submissions for the festival were extended earlier in the year, and are open until July 6.