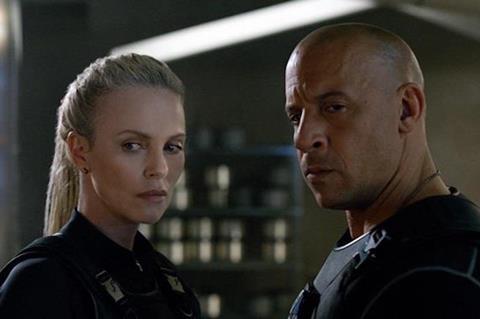 The Fate Of The Furious

Universal Pictures posted its second highest global and international year at the box office in 2017 as 64 releases generated $5.129bn and $3.439bn, respectively, over the 12-month period ending December 31.

The international running total ranks second only to the $4.4bn registered in 2015 and is likely to rise as late receipts come in from territories. The global haul trails the $6.88bn achieved in 2015. North America generated $1.689bn.

The Fate Of The Furious was the studio’s top earner in 2017 on $1.236bn worldwide and $1.009bn internationally; followed by Illumination Entertainment’s Despicable Me 3 on $1.034bn worldwide, of which $768.9m came from international markets.

“We’ve had a profile of titles from the world of Jason Blum up to The Fate Of The Furious,” noted Universal Pictures International president of distribution Duncan Clark.

Fate Of The Furious, Despicable Me 3 excel

Clark hailed the Fast And The Furious franchise as “an extraordinary success story for us” since the studio reinvented the franchise on the fourth entry. “It commonly denominates success everywhere,” he said. “In Europe, Latin America, Asia and particularly China it has been a tremendous story for us and we’re busy on the next sequence of these films including a spin-off with Dwayne Johnson and Jason Statham.”

He also cited Despicable Me 3. “It’s been strong in Latin America, China, and Japan, which has been extraordinary on 7.5bn yen [approximately $66m]. Japan’s a tough market and 50% of film slots go to local-language titles. It’s quite rare to get above four or five billion yen.”

Similarly Split and awards contender Get Out have impressed. “Once you hit the sweet spot in that horror genre it can expand and that’s what we had with Get Out. At the time we didn’t envision it doing $70m internationally and on top of that it’s an awards contender.”

Every territory beat its 2016 total in local currency terms except for Iceland, which overtook the previous year when translated into the USD equivalent.

“Brazil is a great story for us,” Clark said. “We opened up our Brazil office about 15 months ago, which has been a great coup for us. Family films in that market when you hit the sweet spot can be enormously successful.

“China has experienced astronomical theatrical growth since 2006 when they began the process of urbanisation. They’ve got about 50,000 screens and you can look towards 70-80,000 in the next few years.”

Spanish mystery Marrowbone ended its 2017 run as the third biggest Spanish release on $8.4m, while French horror Raw ended the year on $2.6m.